Rather than representing UV-induced mutation, as is the case with most acquired naevi, the congenital melanocytic naevus is thought to arise from rests of melanocytes being left behind on their ascent from the neural crest to the epidermis. NRAS mutations are common in congenital naevi. True congenital naevi affect approximately 1% of neonates and are classified clinically according to size.

Histologically, congenital naevi may be junctional, compound or dermal. Extension of naevus cells around nerves, vessels and adnexae is characteristic, as is a diffusely infiltrative pattern between collagen bundles. Extension of naevus cells into the deep dermis is described in about 40% of cases and full thickness dermal involvement may occur in larger lesions (figure 1). Larger congenital naevi may involve deeper structures including bone, meninges and the central nervous system. 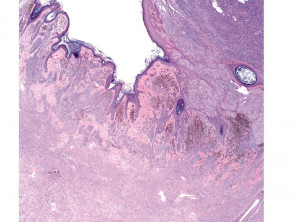 Proliferative nodules in a congenital naevus

These problematic lesions develop as nodules or plaques within a congenital naevus. Usually they arise in large congenital naevi but they are being increasingly reported in smaller congenital naevi, where they may be over-diagnosed as melanoma. The proliferative nodules usually develop slowly then remain stable. Histologically there is a stark contrast with surrounding cells due to high cellular density (figure 2). Gradual blending of the cellular nodule with the surrounding naevus cells may be observed. Though some mitoses may be seen in these lesions, numerous mitoses or necrosis would suggest melanoma rather than a proliferative nodule. 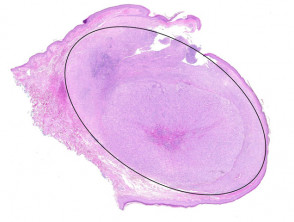 Melanoma arising in a congenital naevus

In adults and in smaller congenital naevi, melanomas arise at the junction/superficial dermis often on the edge of the congenital melanocytic naevus. They resemble de novo superficial spreading melanoma. 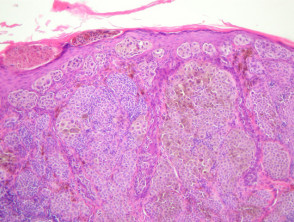 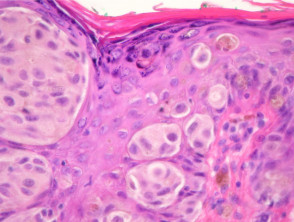