Cryptococcosis is a systemic disease caused by the yeast-like fungus Cryptococcus neoformans. It is an encapsulated yeast which has five serotypes, A, B, C, D, and AD, of two varieties called neoformans (A, D, and AD) and gatii (B and C). The latter is more prevalent in Australasia.

The yeast forms of cryptococcosis are usually surrounded by massive gelatinous oedema (figure 1, arrow). The surrounding inflammatory reaction depends on the stage of the clinical lesion and on the immune status of the patient. Immunocompetent patients may elicit a brisk granulomatous response in which the organisms may be difficult to see without special stains, while immunocompromised patients show minimal inflammation and oedema around the numerous yeast forms as seen in the case illustrated here (figure 2). The yeast forms of cryptococcosis are usually widely separated by their thick mucoid capsules. PAS stain decorates the yeasts (figure 3) and mucicarmine stain decorates the highly characteristic gelatinous capsule a bright pink (figure 4). 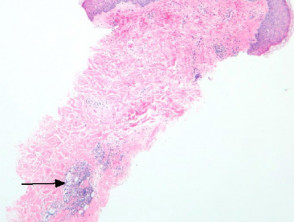 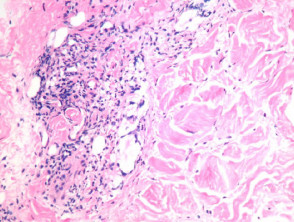 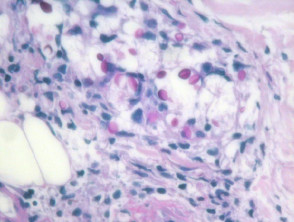 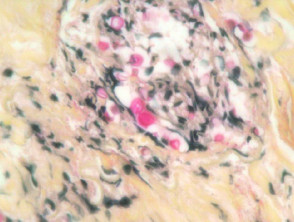 Histoplasmosis and blastomycosis – Mucicarmine positivity discriminates cryptococcus from these other organisms. The situation can be complicated with the rare cryptococcal strain which lacks a capsule. In cases of doubt cryptococcal antigens can be identified with latex agglutination of in situ hybridization can be used.