Histoplasmosis is caused by Histoplasma capsulatum, a dimorphic fungus. It is distributed worldwide and prevalent in certain regions of North and Central America. Cutaneous manifestations are reported to occur in 10% to 25% of AIDS patients with disseminated histoplasmosis.

Histopathologic examination of histoplasmosis reveals a dense dermal infiltrate under an attenuated or unremarkable epidermis (figure 1). On higher power the infiltrate is revealed to contain numerous plasma cells, histiocytes and lymphocytes (figure 2). Depending on the state of the host and stage of the lesions there may be extensive granulomas. Accompanying the infiltrate there are numerous budding yeast forms, predominantly within histiocytes, and few organisms residing extracellularly A clear space or artifactual “halo” may be evident due to the retraction of the basophilic fungal cell cytoplasm from the poorly stained cell wall (figure 2, arrow). GMS confirms the presence of numerous 2–4 μm fungal spores consistent with Histoplasma capsulatum (figure 3). 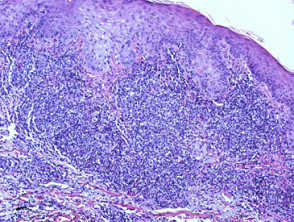 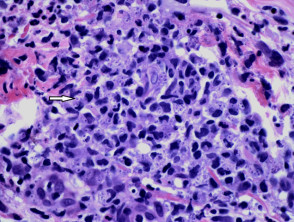 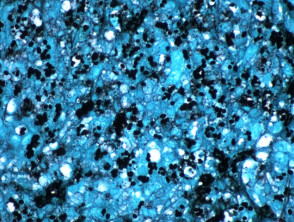 In histoplasmosis, GMS and PAS are often required help illustrate the characteristic yeasts. This is especially helpful in immunocompetent hosts with a brisk inflammatory response.

Cryptococcus and blastomycosis – Mucicarmine positivity discriminates crytococcus from these other organisms. Blastomycosis is a much larger organism and lacks the typical halo seen around histoplasmosis forms. Blastomycosis typically elicits a brisk epidermal response.