These rare cysts are likely derived from a range of developmental abnormalities depending on the anatomic site. “Cutaneous ciliated cyst of the lower limb” is the most commonly described variant. This almost exclusively arises on the lower limb of women.

In cutaneous ciliated cyst, sections show a dermally based cyst (figure 1) which is often filled with secretions and debris (figure 2). The cyst is lined by a cuboidal or columnar epithelium which is ciliated (figures 3 and 4, arrows indicate cilia). There may be areas of squamous metaplasia. 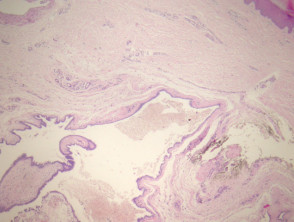 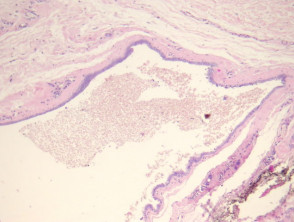 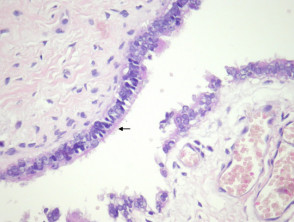 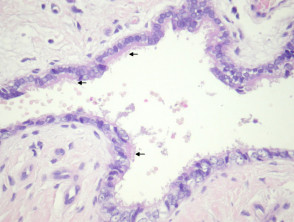 Bronchogenic cyst – Often have smooth muscle, glands, and sometimes cartilage in the wall. These typically arise in the midline near the sternum.

Branchial cleft cyst – Is usually squamous-lined, but may show foci of glandular epithelium with cilia. Typically the wall shows lymphoid tissue. Smooth muscle and cartilage are also often seen in the wall.