What is cutaneous larva migrans?

Cutaneous larva migrans is a parasitic skin infection caused by hookworm larvae that usually infest cats, dogs and other animals. Humans can be infected with the larvae by walking barefoot on sandy beaches or contacting moist soft soil that has been contaminated with animal faeces. It is also known as creeping eruption as once infected, the larvae migrate under the skin's surface and cause itchy red lines or tracks. 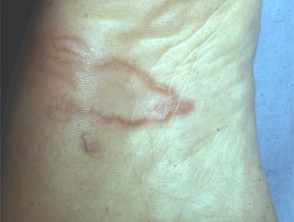 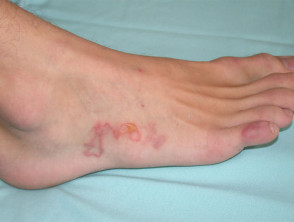 Many types of hookworm can cause cutaneous larva migrans. Common causes are:

Who is at risk of cutaneous larva migrans?

People of all ages, sex and race can be affected by cutaneous larva migrans if they have been exposed to hookworm larvae. It is most commonly found in tropical or subtropical geographic locations. Groups at risk include those with occupations or hobbies that bring them into contact with warm, moist, sandy soil. These may include:

Most larva migrans seen in New Zealand arises during overseas holidays, but it has rarely been reported in those who have never been out of the country.

How does hookworm infection occur?

Parasite eggs are passed in the faeces of infested animals to warm, moist, sandy soil, where the larvae hatch. On contact with human skin, the larvae can penetrate through hair follicles, cracks or even intact skin to infect the human host. Between a few days and a few months after the initial infection, the larvae migrate beneath the skin. In an animal host, the larvae are able to penetrate the deeper layers of the skin (the dermis) and infect the blood and lymphatic system. Once in the intestine, they mature sexually to create more eggs that are then excreted to start the cycle again.

However, in a human host, the larvae can rarely penetrate the basement membrane to invade the dermis so the disease usually remains confined to the outer layers of the skin. See larva migrans pathology.

What are the signs and symptoms of cutaneous larva migrans?

A non-specific eruption occurs at the site of penetration of the hookworm larvae. There may be a tingling or prickling sensation within 30 minutes of the larvae penetrating. The larvae can then either lie dormant for weeks or months or immediately begin creeping activity that creates 2–3 mm-wide, snakelike tracks stretching 3–4 cm from the penetration site. These are slightly raised, flesh-coloured or pink and cause intense itching. Tracks advance a few millimetres to a few centimetres daily and if many larvae are involved a disorganised series of loops and tortuous tracks may form.

Sites most commonly affected by cutaneous larva migrans are the feet, spaces between the toes, hands, knees and buttocks.

What treatment is available for cutaneous larva migrans?

Cutaneous larva migrans is self-limiting. Humans are an accidental and 'dead-end' host so the hookworm larvae eventually die. The natural duration of the disease varies considerably depending on the species of larvae involved. In most cases, lesions will resolve without treatment within 4–8 weeks.

However, effective treatment is available to shorten the course of the disease.