Cutaneous tuberculosis is caused by infection by Mycobacterium tuberculosis. There have been various methods of classifying infection. Traditionally infection has been divided into primary infection, where there has been no previous exposure to the organism, and secondary tuberculosis resulting from re-infection.

Primary inoculation with tubercle bacilli may begin with surface ulceration, epidermal hyperplasia, and a dense dermal infiltrate rich in neutrophils (figure 1). Disseminated cutaneous tuberculosis and orificial tuberculosis will typically show a similar neutrophilic reaction in early lesions. Over time, the neutrophils are replaced by chronic inflammatory cells and necrotising granulomatous inflammation surrounded by numerous lymphocytes if the patient has a competent immune system (as seen with the clinical subtype tuberculosis verrucosa). Figures 2,3,4 show the same image of the characteristic necrotising granulomatous inflammation surrounded by a lymphocytic response at progressively higher magnifications. Tubercle bacilli are usually easy to find in early suppurative lesions and difficult to identify when the granulomatous inflammation has become well developed.

Lupus vulgaris is the most common clinical type of re-infection cutaneous tuberculosis and shows well-formed granulomas surrounded by chronic inflammatory cells, and central necrosis (figures 2-4). The necrosis is usually less pronounced than the example illustrated here.

Scrofuloderma will show a histologic picture similar to that seen in figures 2,4 but there is often surface ulceration and suppuration as well as the infected lymph nodes connected via sinus tracts with the overlying skin. 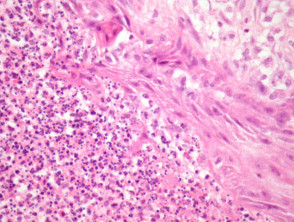 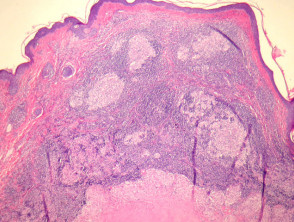 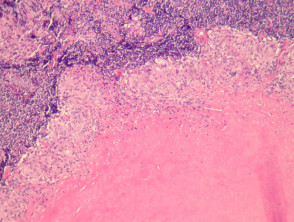 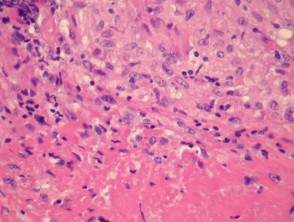 Tubercle bacilli can be demonstrated in cutaneous tuberculosis with Ziehl-Neelsen/acid-fast stain but may be extremely difficult to find and absent in many cases, particularly when the granulomatous response is well established. Culture studies are sometimes useful but may take months to complete. Polymerase chain reaction (PCR) can allow rapid analysis, but may not be very sensitive in paucibacillary forms of cutaneous tuberculosis.

Tuberculoid leprosy – Neural infiltration and less necrosis are clues to this diagnosis. Plasma cells are said to be more common in leprosy. PCR or culture studies may be needed for this distinction.

Sarcoidosis – Typically lacks caseating necrosis but may show some fibrinoid degeneration within the granulomas which can cause confusion. Sarcoid typically lacks the lymphocytic response often seen in tuberculosis (figures 1, 2). PCR and culture studies can be helpful.