Lepromatous leprosy – Underneath a normal epidermis and grenz zone, there are sheets or clusters of macrophages (figure 1). The macrophages have an abundant pink to pale cytoplasm which corresponds to numerous intracellular (parasitized) organisms (figure 2). The associated infiltrate is usually sparse and mainly lymphocytic. In older lesions, the macrophages may have a bubbly cytoplasm (figure 2). As opposed to tuberculoid leprosy, there are not well-formed granulomas or infiltration of nerves.

Tuberculoid leprosy – There is a tuberculoid or sarcoidal granulomatous reaction throughout the dermis consisting of some Langhans giant cells, macrophages in tight clusters, and few accompanying lymphocytes (figure 3). The infiltrate may extensively infiltrate peripheral nerves (figure 4, arrow), vessels, the overlying epidermis and arrectores pilorum.

Erythema nodosum leprosum – Shows a dense infiltrate which extends into the subcutis, particularly around vasculature. In addition to epithelioid histiocytes with a large pink-bubbly cytoplasm seen in other clinical types, there is a polymorphous population of acute and chronic inflammatory cells. 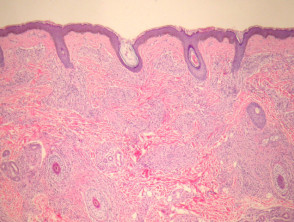 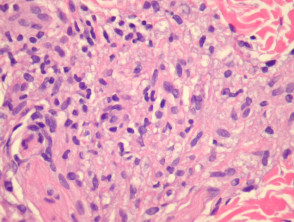 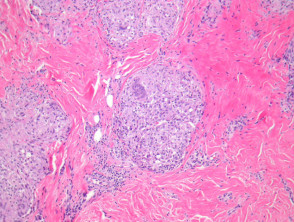 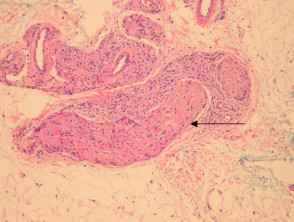 The leprosy organisms may be demonstrated with a modified Ziehl-Neelsen stain (Wade-Fite). Lesions of lepromatous leprosy will show numerous organisms which are easy to identify. Cases of tuberculoid, indeterminate and erythema nodosum leprosum may prove difficult as the organisms may be scarce. Polymerase chain reaction (PCR) studies may prove useful in confirming the diagnosis of leprosy.

Lymphoma – T-cell lymphomas may be neurotropic and associated with sparse histiocytes, producing a pattern similar to indeterminate leprosy. Special studies to reveal a T-cell clone and/or isolate the organisms are sometimes needed.