Low power view of cylindroma shows a non-encapsulated tumour nodule arising from the dermis (Figure 1). This is formed by multiple irregular tumour islands, distributed in an aptly named ‘jigsaw’ pattern (Figure 2). Surrounding the tumour islands, and in discrete droplets within the nodules is a thick hyaline deposit (Figure 3). Two populations of cells are noted to make up the tumour nodules. A smaller cell with a hyperchromatic nucleus tending to the periphery, and larger cells with open nuclei throughout the centre of the nodules (Figure 4). 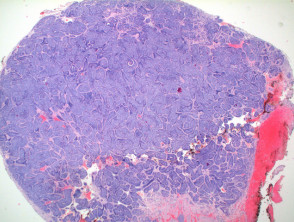 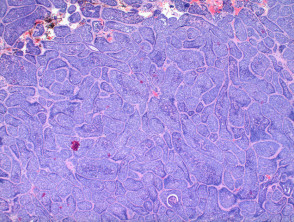 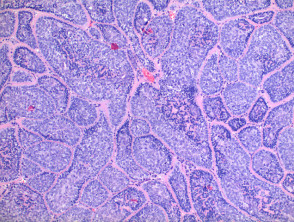 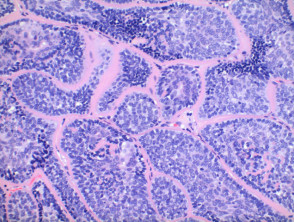 The hyaline bands and deposits are PAS positive and diastase resistant, and are known to contain type IV and type VII collagen.

Brooke-Spiegler syndrome and multiple cylindromatosis turban tumour syndrome: No differences are seen between sporadic cylindromas or those occurring in the context of this syndromes. Tumours with overlap features with eccrine spiradenoma can be seen.

Eccrine spiradenoma: In this tumour the low power view shows a diffuse proliferation of the basophilic component while lacking the discrete tumour islands. There is frequently a minor lymphocytic infiltrate present, while in cylindroma there is a more prominent population of S100 positive dendritic cells.

Spiradenocylindroma: In some tumours features of both cylindroma and eccrine spiradenoma can be seen and are designated as overlap tumours.