Low power view of eccrine spiradenoma shows a well-circumscribed tumour nodule arising within the dermis or superficial subcutis. The tumour is comprised of a diffuse dense basophilic cellular proliferation (Figures 1 and 2). In some cases a prominent vascular component can be seen (Figures 2 and 3). Eosinophilic hyaline deposits are seen in amongst the tumour cells as droplets and bands (Figure 4). A lymphocytic infiltrate is seen and when heavy can mimic lymphoid tissue. 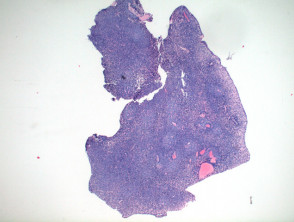 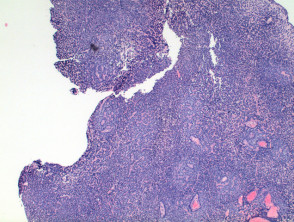 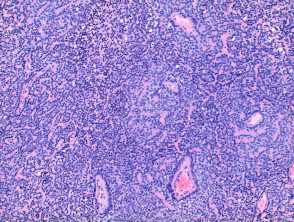 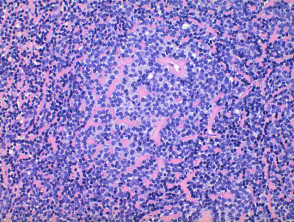 Cylindroma — in this tumour the low power view shows discrete polygonal tumour islands. There is frequently a more prominent population of S100 positive dendritic cells while in eccrine spiradenoma there is a lymphocytic infiltrate.

Spiradenocylindroma — some tumours features of both cylindroma and eccrine spiradenoma can be seen and are designated as overlap tumours.

Cutaneous lymphadenoma — in this tumour there is a lobular tumour of basaloid cells which may show peripheral palisading, and a dense mixed inflammatory cell infiltrate though predominantly lymphocytic.