What is DiGeorge syndrome?

DiGeorge syndrome is a rare primary immunodeficiency disorder with a wide range of presenting signs and symptoms. It is due to chromosomal defects that arise early in gestation.

DiGeorge syndrome is caused by dysfunctional development of certain cells and tissues in utero. Approximately 90% of the patients with DiGeorge syndrome have a deletion of a segment of 30–40 genes on chromosome 22. Generally, this is considered to be the consequence of a random event in either the egg or the sperm, but more rarely it can be passed on from parent to child. 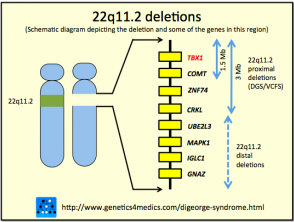 What are the signs and symptoms of DiGeorge syndrome?

Because there is great phenotypic variability associated with this syndrome, one patient may present with vastly different symptoms from another. Possible symptoms include:

What complications can arise from DiGeorge syndrome?

Possible complications arising from DiGeorge syndrome are varied and may include:

How is DiGeorge syndrome diagnosed?

DiGeorge syndrome is diagnosed based on patient signs and symptoms, the presence of a heart defect (though this by itself is not diagnostic), and genetic testing, fluorescence in situ hybridisation (FISH), is used to determine deletion in chromosome 22.

How is DiGeorge syndrome treated?

There is no cure for DiGeorge syndrome. Treatment is based on correcting or managing secondary problems wherever possible. This can include:

This page doesn't have an image or needs more images. Submit your photo for inclusion.