Eccrine spiradenocarcinoma is a rare sweat gland tumour. It typically arises within a pre-existing eccrine spiradenoma that has been present for many years.

In eccrine spiradenocarcinoma, sections show areas of benign eccrine spiradenoma with an abrupt transition in morphology (figures 1, 2). The malignant areas can be carcinomatous or sarcomatous. The carcinoma typically shows marked nuclear pleomorphism, atypia and mitoses (figures 2, 3).

A low-grade form has also been described in which the tumour cells show lesser nuclear atypia but the usual architecture of eccrine spiradenoma is lost, there are increased mitoses and often infiltration of surrounding structures. 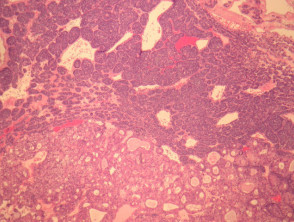 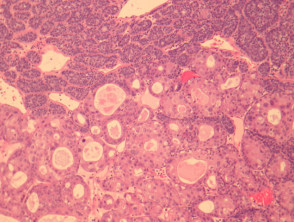 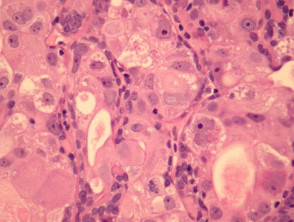 None are generally needed. Stains to examine lymphatics (D2-40) or the proliferative rate (ki67) may be helpful.