Scanning power view of eosinophilic fasciitis shows a sclerosing process affecting the deep subcutaneous tissue and fascia (Figure 1). In early disease there is oedema of the fascia and subcutaneous tissue with a lymphocytic infiltrate containing plasma cells and eosinophils. With time the collagen becomes thickened and sclerotic (Figure 2) with extension into the subcutaneous fibrous septae. Lobular involvement is rare. The tissue eosinophils may be focal around adnexal structures or diffuse within the tissue infiltrate (Figure 3). In more extensively involved cases the changes can extend to the dermis. The epidermis is typically not involved, though mild atrophy can be seen in a minority of cases. 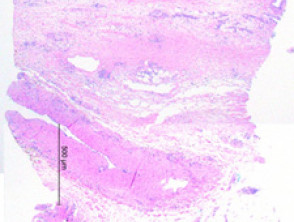 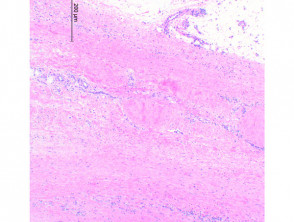 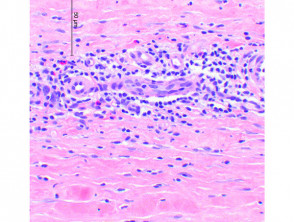 Scleroderma: Involvement of the epidermis and upper dermis is rare in eosinophilic fasciitis, particularly in early lesions. Significant numbers of eosinophils in the infiltrate would not favour scleroderma.

Arthropod bite reaction : While a deep eosinophilic infiltrate may be seen, extension into and beyond the subcutaneous tissue is atypical. The presence of superficial epidermal and dermal changes would argue against eosinophilic fasciitis.

Proliferative fasciitis : In addition to fascial fibrosis there are large ganglion like cells and a pauci-inflammatory myxoid stroma.