Table of contents
Introduction History Demographics How to use

What are escharotic agents?

Escharotic agents are caustic, corrosive salves, pastes, poultices and plasters that are purported to destroy cancer cells and cure skin cancers including basal cell carcinomas, squamous cell carcinomas and melanomas. They are called escharotics because they produce a thick black, dry scab called an “eschar” on the skin. 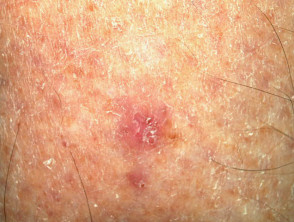 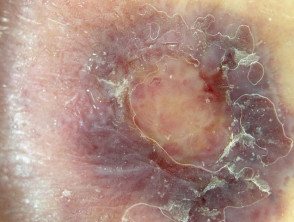 Ulceration due to escharotic agent 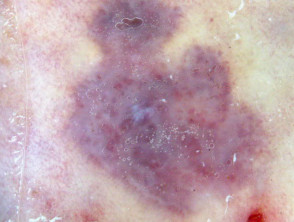 What is the history of escharotic agents?

The two most common ingredients used in escharotic agents are zinc chloride and bloodroot (contains the alkaloid sanguinarine that is derived from the root of the plant Sanguinaria canadensis). Zinc chloride was one of the agents used as a tissue fixative in early Mohs micrographic surgery (MMS) procedures. This technique was discovered by Dr Frederick Mohs in the early 1930’s and involved fixation of cancerous tissue with “Mohs paste” prior to excision. MMS has since been refined and perfected over the last 50 years and Mohs fixed-tissue technique has been replaced with Mohs fresh frozen tissue sampling. The disadvantages of fixed-tissue technique included destruction of adjacent healthy tissue, increased pain and lengthened surgical time.

During the same period as Mohs fixed tissue technique was proving to be effective in treating certain skin cancers, Harry Hoxsey, a lay cancer specialist was developing a herbal tonic and paste designed to treat internal and external cancers. Hoxsey’s paste is very much like Mohs' paste and contains zinc chloride and bloodroot. Hoxsey recommended applying paste to the affected area and within days to weeks, the area would necrose (cell death), separate from surrounding tissue and fall out. This treatment was never scientifically tested or proven and in the 1950’s the FDA (Food Drug Administration) condemned Hoxsey’s formulas and practices. Hoxsey moved his clinics to Mexico, where some are still operating today. 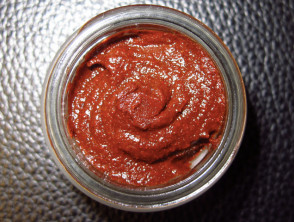 The use of escharotic agents has fallen out of practice in conventional medicine because their efficacy is unproved and their content is unregulated. In addition, conventional treatment including MMS is proving very effective at completely removing skin cancers while sparing normal healthy tissue.

People still using escharotic agents are those seeking an alternative treatment to conventional therapy. These individuals may have a fear of surgery or are just seeking a more natural remedy. With the ever-growing use of the Internet, people are able to access information about diseases and remedies more readily. There are numerous sites that advertise escharotic agents that are backed up with unsubstantiated testimonials and claims of curing skin cancer amongst other cancers. Through these sites individuals are able to purchase escharotic agents directly and self-administer at home. One such website marketing escharotic agents has been taken offline in what appears to be in response to a published letter from the FDA. Because it marketed the escharotic agents as a drug it was subject to FDA regulations and the FDA declared that the makers of the product failed to comply with federal laws and regulations.

Why not use escharotic agents?

Further dangers regarding the use of escharotics agents include:

Until there is more scientific evidence of the safety and efficacy of escharotic agents, physicians and dermatologists should not be recommending the use of these products. Patients whom seek alternative therapies must be aware of the potential dangers of escharotic agents and should seek sound clinical advice from their physician before using them.