Fibrofolliculoma and trichodiscomas are thought by many authors to represent different ends of the spectrum of the same entity. These can occur as single papules on the face, or as multiple lesions. Multiple lesions may occur in isolation or represent part of Birt-Hogg-Dubé syndrome.

Sections through fibrofolliculoma show a proliferation of follicular epithelium surrounded by a perifollicular fibrous sheath (figure 1–3). The epithelial strands are composed of thin cords of epithelial cells. The stroma surrounding the epithelium may be densely fibrous and sclerotic or rather loose and contain mucin. The patient illustrated in Figures 1-3 was later found to have Birt-Hogg-Dubé syndrome.

Lesions referred to as fibrofolliculoma contain prominent epithelial strands which are centered around the infundibular portion of a hair. Trichodiscoma is mainly fibrous, often with just a surrounding collarette of epithelium. 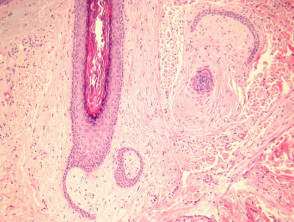 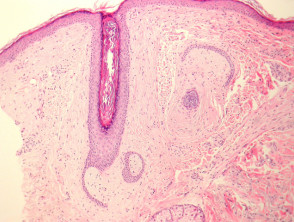 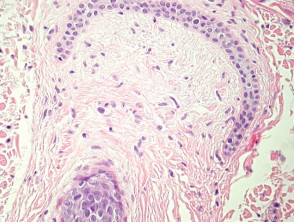 Neurofollicular hamartoma – These are thought to be a spindle cell rich form of trichodiscoma by some authorities. The spindle cells are often positive with S100 and CD34