What is a skin flap?

A skin flap is a type of wound closure. A local skin flap consists of skin taken from an adjacent area and moved to fill the surgical defect often created from the removal of a skin lesion such as skin cancer. Flaps differ from skin grafts in that a flap is transferred with an intact blood supply and remains connected to its origin, while a graft is a transfer of tissue which has been completely removed from its origin and therefore relies entirely on the recipient site for its blood supply.

When is a flap necessary?

A skin flap is required when the injury or area that has lost tissue is too big for the edges to be brought together directly. The flap covers the area and depth of the wound. The flap continues to be fed by the same blood supply from where it was taken, until new blood vessels grow from the recipient site and the wound heals completely.

Some flaps known as interpolation flaps are performed in two stages. In the first stage the skin flap is removed from its original location and sewn into the defect leaving a bridge of tissue between the two areas (the flap pedicle). The pedicle supplies the flap with blood for a couple of weeks until the second stage when the pedicle is able to be cut and sewn in to complete the repair.

What are the benefits of using a skin flap to close a wound?

Where a wound is unable to be repaired using a primary closure (or secondary intention healing) a flap provides the benefit of supplying tissue of a similar appearance and thickness to that of the tissue which has been removed. This means the ultimate cosmetic result is usually superior to that of a skin graft.

Skin flaps also often heal faster than skin grafts, and usually do not require the creation of a separate wound in another location. Having said this, sometimes another repair option such as skin grafting is preferable in certain situations and your surgeon will discuss this with you.

What are the different types of flap surgery? 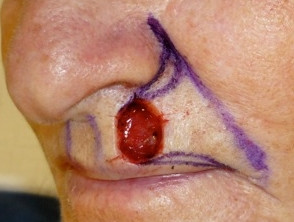 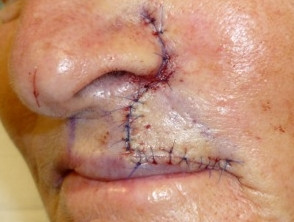 What is involved in having a skin flap?

Your dermatologist or surgeon will explain to you why a skin flap is required and the type of skin flap you will need. He or she will explain the procedure involved, including the area of the body from where the flap will be taken, and common complications. Most local skin flap surgery is performed under local anaesthesia. Your dermatologist will explain to you why the skin lesion needs excision and the procedure involved. You may have to sign a consent form to indicate that you understand and agree to the surgical procedure. Tell your doctor if you are taking any medication (particularly aspirin, clopidogrel, dabigatran and warfarin, which could make you bleed more), or if you have any allergies, medical conditions, or a pacemaker or implanted defibrillator. Remember, to tell your doctor about any over-the-counter supplements or herbal remedies as a number of these can also lead to abnormal bleeding.

The procedure may create two wound sites, the site receiving the flap and the site where the skin flap was taken from. However, aside from interpolation or distant flaps, these two sites are usually immediately adjacent, and will be dressed under the one dressing. Your wound may be tender 1-2 hours after the excision when the local anaesthetic wears off.

Leave the dressing in place for 48 hours or as advised by your dermatologist. Avoid strenuous exertion and stretching of the area until the stitches are removed and for some time afterwards.

If there is any bleeding, press on the wound firmly with a clean folded towel without removing the existing dressing or looking at it for 20 minutes. If it is still bleeding after this time, seek medical attention.

Keep the wound dry for 48 hours. You can then gently wash and dry the wound. A small amount of pinkness and tenderness to touch around the wound edges is normal but, if the wound becomes increasingly red or painful, consult your dermatologist promptly - it could be infected and need a course of antibiotics.

Usually stitches are removed 5-10 days after the operation. The scar will initially be red and raised but usually reduces in colour and size over several months.

Occasionally, your doctor may suggest a secondary procedure to further improve the appearance of the skin flap some weeks to months after the area has healed. This may require subtle surgical movement or flattening of the tissue, or resurfacing with a laser.