What is the global solar ultraviolet index?

The global solar ultraviolet index (UVI) describes the level of solar ultraviolet radiation (UVR) at the Earth's surface and ranges from 1 to 11+. The higher the UVI, the greater the potential for damage to the skin and eyes, and the shorter the time before skin damage (manifested as skin reddening, or erythema). 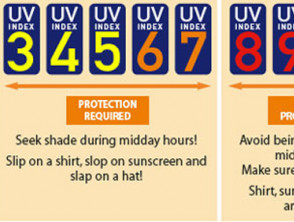 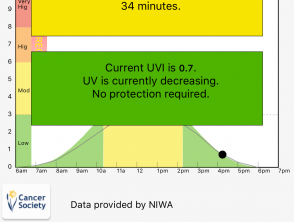 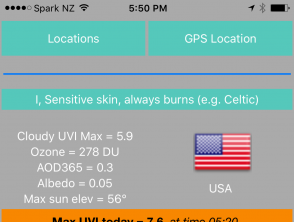 What affects the ultraviolet index?

The UVI is affected by:

What do the UVI numbers mean?

Levels 1 and 2: In the green band, levels one and two, the UV level is low. Low protection is needed and people can safely stay outside.

Levels 3 to 5: The yellow band, numbers three to five, indicates moderate UV levels. Protection is required when spending long periods outside. Kiwis will be advised to follow the Cancer Society's slip, slop, slap and wrap behaviours.

Levels 6 and 7: Protection is essential at levels six and seven, represented by an amber band. Kiwis will be advised to follow the Cancer Society's slip, slop, slap and wrap behaviours.

Levels 8 to 10: When UV levels are in the very high red band, eight to ten, it's recommended people seek shade between 11 am and 4 pm, slip, slop, slap and wrap and make sure they reapply sunscreen at least every two hours.

Level 11+: Levels of 11 or higher, shown in a purple band, are regarded as extreme. Reschedule activities for the early morning and evening. Full protection is essential between 11 am and 4 pm.

How does ultraviolet radiation damage the skin?

Ultraviolet radiation (UVR) is the most important preventable risk factor for skin cancer. New Zealand has the highest rates of melanoma in the world. Nearly 300 people die from skin cancer (mostly from melanoma) and more than 50,000 cases of melanoma and non-melanoma skin cancer are diagnosed in New Zealand each year. The cost to the health system is believed to be more than NZ$50 million annually.

Whenever the UVI is over 3, and especially when UVI levels are high, sun protection should include:

Avoid artificial sources of UVR, such as sunbeds, at all times.

The global solar UVI was developed by the World Health Organisation (WHO) in partnership with the World Meteorological Organisation (WMO), the United Nations Environment Program (UNEP), the International Agency for Cancer Research (IARC), the International Commission on Non-Ionizing Radiation Protection (ICNIRP) and collaborating centres including the Cancer Society of New Zealand, the Health Sponsorship Council's SunSmart brand and the National Institute of Water and Atmospheric Research (NIWA).

One UVI Unit is equivalent to 25mW/m2 UVR reaching the Earth's surface. The UVI forecasts usually report at least the daily maximum UVR levels averaged over a 30-minute time period, assuming there is no cloud cover and other modifying factors.

The Global Solar UVI is formulated using the International Commission on Illumination (CIE) reference action spectrum for UV-induced erythema on the human skin. The UVI is defined by the formula:

Refer to Intersun for an explanation.