What is habit-tic nail deformity?

Habit-tic nail deformity (HTD) is a type of acquired psychodermatosis affecting the nail unit. It is caused by nail picking, primarily directed at the proximal nail fold.

HTD is a form of onychotillomania, which refers to compulsive or habitual self-imposed external trauma involving the fingernails or toenails. The term onychotillomania derives from the Greek words onycho (nail), tillo (to pull), and mania (madness). 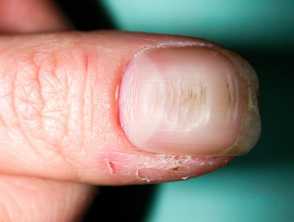 Who gets habit-tic nail deformity?

HTD can be present in children and adults. Medical literature on this condition, including epidemiological data, is limited; the true prevalence is unknown and underreporting is likely.

One study of 339 young adults at Wroclaw Medical University in Poland, published in 2014, found that 19.2% reported active nail biting (and a further 27.7% previous nail biting). By contrast, only 3 (0.9%; comprising 2 female students and 1 male) reported habitual nail picking, with the mean age of onset of symptoms being 8.6 +/- 2.3 years of age.

HTD is caused when people (consciously or unconsciously) pick at/ push back/ rub the proximal nail fold, usually using another finger on the ipsilateral hand. The thumbnail is most commonly affected. This can be a type of obsessive-compulsive behaviour.

Onychotillomania such as HTD has also been associated with insensitivity to pain, acquired (eg, caused by spinal cord injury) or inherited (eg, genetic disorders that alter the pain response such as Lesch-Nyhan syndrome or Smith-Magenis syndrome).

What are the clinical features of habit-tic nail deformity?

Patients with HTD may report feelings of relief after nail picking, or previous unsuccessful attempts to break the habit.

HTD may be associated with a variety of other disorders, including obsessive-compulsive disorder (OCD), depression, anxiety, and psychotic features such as delusions (eg, infestational delusions). It may also co-occur with other psychodermatoses such as compulsive skin picking, trichotillomania (hair-pulling disorder), or onychophagia.

What are the complications of habit-tic nail deformity?

How is habit-tic nail deformity diagnosed?

HTD is generally diagnosed clinically, including:

Patients may be reluctant to disclose self-manipulation or self-trauma to the nail/s; or indeed they may not be aware of nail picking habits if it is done unconsciously. Often a family member may admit that they however have witnessed the habit. Nail picking may not be the primary presenting complaint, and HTD is often diagnosed incidentally.

Onychotillomania can be a type of body-focused repetitive behaviour (BFRB) disorder, which falls under the obsessive-compulsive and related disorders category, according to the American Psychiatric Association's Diagnostic and Statistical Manual of Mental Disorders, Fifth Edition (DSM-5). Specifically, BFRB disorder is: ‘characterized by recurrent body-focused repetitive behaviors (eg, nail biting, lip biting, cheek chewing) and repeated attempts to decrease or stop the behaviors. These symptoms cause clinically significant distress or impairment in social, occupational, or other important areas of functioning and are not better explained by trichotillomania (hair-pulling disorder), excoriation (skin-picking) disorder, stereotypic movement disorder, or nonsuicidal self-injury.’ [DSM-5, p. 263-264].

Nail clippings for fungal microscopy and culture may help to differentiate HTD from a fungal infection if the diagnosis is unclear.

Nail biopsy is rarely required. Histopathological features in HTD are non-specific, and may include epithelial hyperplasia with acanthosis, hypergranulosis, and hyperkeratosis. Inflammatory infiltrate is usually not seen.

What is the differential diagnosis for habit-tic nail deformity?

What is the treatment for habit-tic nail deformity?

Treatment for HTD centres around prevention of further damage to the affected nail plate/s to allow healing, and breaking the cycle of ongoing habitual nail trauma.

Evidence to date is limited, but the following may be helpful aspects of treatment:

What is the outcome for habit-tic nail deformity?