What are fungal nail infections?

Fungal infection of the nails is also known as onychomycosis. It is increasingly common with increased age. It rarely affects children.

Which organisms cause onychomycosis?

Onychomycosis can be due to: 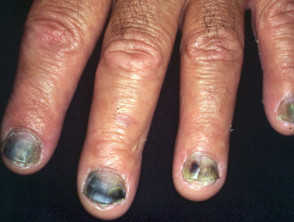 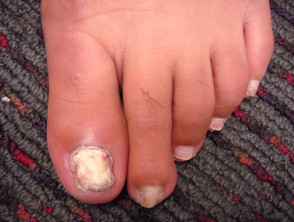 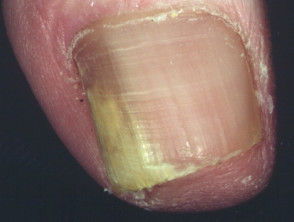 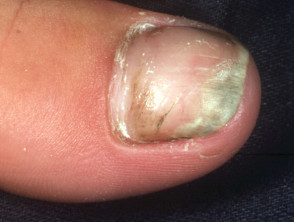 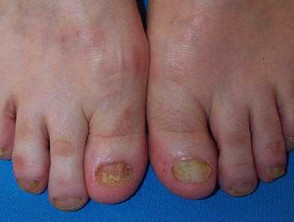 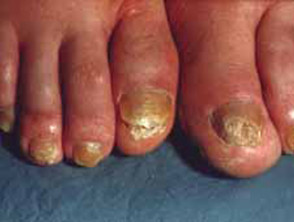 What are the clinical features of onychomycosis?

Onychomycosis may affect one or more toenails and fingernails and most often involves the great toenail or the little toenail. It can present in one or several different patterns.

Tinea unguium often results from untreated tinea pedis (feet) or tinea manuum (hand). It may follow an injury to the nail or inflammatory disease of the nail.

Candida infection of the nail plate generally results from paronychia and starts near the nail fold (the cuticle). The nail fold is swollen and red, lifted off the nail plate. White, yellow, green or black marks appear on the nearby nail and spread. The nail may lift off its bed and is tender if you press on it.

Mould infections are similar in appearance to tinea unguium.

Onychomycosis must be distinguished from other nail disorders.

How is the diagnosis of onychomycosis confirmed?

Clippings should be taken from crumbling tissue at the end of the infected nail. The discoloured surface of the nails can be scraped off. The debris can be scooped out from under the nail. The clippings and scrapings are sent to a mycology laboratory for microscopy and culture.

Previous treatment can reduce the chance of growing the fungus successfully in a culture, so it is best to take the clippings before any treatment is commenced:

What is the treatment of onychomycosis?

Recently, non-drug treatment has been developed to treat onychomycosis thus avoiding the side effects and risks of oral antifungal drugs.

Lasers emitting infrared radiation are thought to kill fungi by the production of heat within the infected tissue. Laser treatment is reported to safely eradicate nail fungi with one to three, almost painless, sessions. Several lasers have been approved for this purpose by the FDA and other regulatory authorities. However, high-quality studies of efficacy are lacking, and existing studies indicate that laser treatment is less medically effective than topical or oral antifungal agents.

Photodynamic therapy using the application of 5-aminolevulinic acid or methyl aminolevulinate followed by exposure to red light has also been reported to be successful in small numbers of patients, whose nails were presoftened or medically avulsed using 40% urea ointment for a week or so.

Iontophoresis and ultrasound are under investigation as devices used to enhance the delivery of antifungal drugs to the nail plate.