Human Immunodeficiency Virus (HIV) is a retrovirus infection which causes an acquired immunodeficiency of the host via reduction in the number of CD4 T cells.

Without appropriate treatment, a person with HIV will eventually progress to the advanced stage of infection, Acquired Immunodeficiency Syndrome (AIDS).

Who gets skin disease in HIV?

Dermatological conditions are extremely common during HIV infection and will affect approximately 90% of all people living with HIV. These conditions can be both specific to HIV, as well as common skin problems found in the general population.

Cutaneous manifestations will generally increase in incidence with advancing HIV disease and declining immune function, causing significant morbidity. Hence, early recognition and testing in patients presenting with such conditions may allow HIV infection to be diagnosed and treated earlier.

What causes skin disease in HIV?

The acquired immunodeficiency associated with HIV puts patients at increased risk of many skin conditions including malignancy and infection.

Antiretroviral medications themselves can also be implicated, with many having high reaction rates and increased photosensitivity risk.

What types of skin disease are found in HIV?

Increased susceptibility to bacterial, viral, fungal and parasitic infections is common and these can appear at different stages of the disease.

Streptococcal and staphylococcal skin infections may be more severe than in the general population and there is a stronger association with MRSA infection. These infections include:

Syphilis may manifest as either a painless chancre or ulcer in the genital region (primary), or a widespread rash with systemic symptoms (secondary). The presence of a chancre may present an increased ability to transmit HIV via sexual contact.

Bacillary angiomatosis is a less common infection, typically seen in immunocompromised patients only. It is caused by two Bartonella bacteria species and presents as a papulonodular rash, with hyperpigmented red or purple lesions. In HIV infection, these can progress to form large, subcutaneous tumours and can be mistaken for nodular Kaposi sarcoma (malignancy).

During the acute HIV infection syndrome (in the first few weeks after initial exposure), patients can develop a symmetrical maculopapular erythematous exanthem that involves the face, palms, soles, trunk, and limbs, in conjunction with systemic viral symptoms. There may also be mucocutaneous ulceration.

Herpes simplex virus (HSV) is the most common viral infection noted in HIV and is often severe and recurrent. This manifests as small groups of painful vesicles, typically in the facial (lips) or genital region, although can occur at any site. Similarly, varicella zoster virus infection (“shingles”) can cause a painful vesicular rash, typically in a dermatomal distribution or as a disseminated rash due to the immunosuppression. This can be persistent and refractory to treatment, causing significant pain.

Molluscum contagiosum infection is caused by a poxvirus, resulting in small, round, skin-coloured papules. Although normally a disease seen in children, it is common and seen early in adults with HIV infection. Compared with the general population, those with HIV may develop larger and more numerous lesions, typically over the face and genital area.

Human papillomavirus is prevalent in the HIV population and will often persist despite highly active antiretroviral therapy (HAART). As well as producing common and genital warts, and a rare condition called acquired epidermodysplasia verruciformis, the oncogenic nature of the virus gives an increased risk of developing malignancies (particularly oral and rectal). The incidence of malignancy is rising because those with HIV are living longer.

Oral hairy leukoplakia is characterised by persistent, asymptomatic white plaques covering the tongue, caused by Epstein-Barr virus. This is seen almost exclusively in immunocompromised people and in HIV infection, typically only at CD4 counts below 200–300micromol/L. It is one of the AIDS-defining diseases. 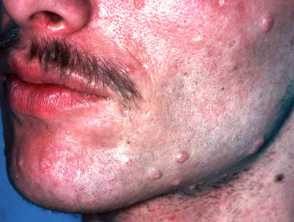 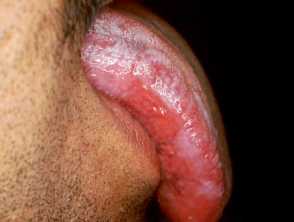 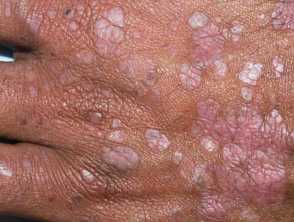 There are a range of fungal infections that occur at different degrees of immunocompromise in HIV. Common presentations such as tinea (of any body area) and onychomycosis and candidal infections can occur early, but are more likely to be severe, atypical in nature, and less responsive to treatment.

Pityrosporum folliculitis and pityriasis versicolor are both conditions caused by Malassezia yeasts, commonly found as part of the normal skin microflora. The former produces an acne-like inflammation around the hair follicle, whereas the latter causes hyper or hypo-pigmented lesions over the skin.

At CD4 counts of below 300, opportunistic infections can arise and are important markers of AIDS. Candidiasis (infection caused by Candida species) causing oral or vaginal thrush may occur early and may involve the oesophagus if there is advanced immunodeficiency.

Systemic mycoses constitute a group of both endemic and opportunistic fungal infections, and cutaneous involvement can be an indicator of disseminated infection. The dermatological features of these diseases vary greatly between patients and organisms, and typically rely on skin biopsy and blood cultures for diagnosis.

People living with HIV have an increased risk of developing cutaneous malignancies due to their impaired immune response.

Prior to widespread treatment with HAART, the AIDS-defining Kaposi sarcoma was the most prevalent malignancy in the HIV population due to infection by human herpesvirus 8. It typically presents with painless, red-purple lesions anywhere in the body and is more strongly associated with a declining CD4 count.

There is a 2-fold increased risk of skin squamous cell carcinoma and basal cell carcinoma in those with HIV, compared to the general population. Improved CD4 count and HAART do not have a protective benefit against developing these malignancies. There is conflicting data regarding the relationship between HIV and melanoma, however when present there is typically an aggressive course and increased mortality.

Psoriasis, seborrheic dermatitis, and eczema are common dermatological conditions in the general population. In people living with HIV, they are often more severe, treatment resistant, and likely to become secondarily infected.

Psoriasis in HIV infection is more likely to present with atypical morphology which can cause diagnostic difficulty. It can worsen acutely and progress to erythroderma with declining immune function.

Seborrheic dermatitis is the most common skin condition found in people living with HIV, although rates have fallen since widespread HAART implementation. It is often refractory to regular treatment until underlying immune function is improved.

Pruritic papular eruption and eosinophilic folliculitis are intensely itchy widespread rashes, which occur exclusively in HIV infection. Pruritic papular eruption can often be the first presentation of HIV in an otherwise asymptomatic person. However, eosinophilic folliculitis typically only occurs at CD4 counts of <300, therefore making it an important diagnostic marker of advanced disease. 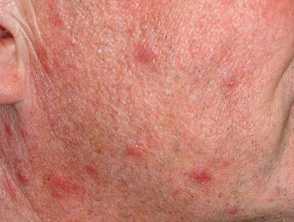 Photosensitivity reactions including porphyria cutanea tarda and chronic actinic dermatitis have been described in several HIV patients with advanced disease. The pathophysiology of these associations is poorly understood.

Lipodystrophy is caused by loss of fat under the skin. It can be due to HIV infection and medication to treat HIV.

How do skin conditions in HIV vary in different skin types?

Erythema is more difficult to assess in skin of colour. In South Africa, it is noted that actinic lichenoid leukomelanoderma of HIV and acquired epidermodysplasia verruciformis are more common.

How are skin conditions in HIV diagnosed?

Many conditions with typical lesions can be diagnosed clinically or with simple investigations. However, the immunosuppressed commonly present with atypical presentations and often a skin biopsy is needed both for histology and appropriate tissue culture.

What is the treatment?

Optimal management requires timely diagnosis of HIV infection and commencement of antiretroviral medication to improve the underlying immunodeficiency. As HIV is not curable, this usually constitutes lifelong HAART therapy.

Treatment is otherwise directed towards the specific dermatologic condition.

What is the outcome for skin conditions in HIV?

With increased availability of HAART, life expectancy for people with HIV is rising steadily. The prognosis for skin conditions associated with low CD4 counts are therefore improving as many will be resistant to optimal treatment without improved underlying immune function.

Without commencing HAART, people with HIV will ultimately progress to the development of AIDS and its associated complications. Malignancy and disseminated opportunistic infections carry high mortality rates.