Talaromycosis is an infection caused by the thermally dimorphic fungus Talaromyces marneffei. The condition was originally called penicilliosis after the organism was called Penicillium marneffei; the fungus was reclassified in 2011.

Talaromycosis is seen almost exclusively in immunocompromised children and adults. Infection was initially identified in HIV/AIDS patients in tropical areas of Southeast Asia in the late 1980s and 1990s. Talaromycosis was classified as an AIDS-defining infection and one of the HIV clinical stage 4 conditions. It has also been reported to develop during the immune-reconstitution syndrome (IRIS).

With antiretroviral treatment (HAART), talaromycosis is now increasingly recognised in HIV-negative patients. Infected adults may have known associated conditions including:

It has been suggested there may be a genetic susceptibility to infection with HLA-associations reported particularly in people of Southeast Asian descent.

Talaromycosis is caused by Talaromyces marneffei, a fungus found in wild bamboo rats, their faeces, and the soil around their burrows. Infection of humans mainly occurs in the rainy season following inhalation of conidia from agricultural soil. Acute infection has an incubation period of 1–3 weeks, but reactivation of latent infection may present years later.

What are the clinical features of talaromycosis?

Talaromycosis can present as a local or disseminated infection. It is primarily a lung infection where it may remain localised.

Systemic features of disseminated talaromycosis include:

How does talaromycosis present in the skin?

Skin lesions are common in HIV/AIDS-associated talaromycosis (70%) and are often the presenting sign. The characteristic lesions are papules with central necrosis or umbilication scattered over the head and upper chest. Nodules, subcutaneous abscesses, pustules, cysts, and ulcers may occur.

In non-HIV-associated talaromycosis, the skin is involved in 40% of cases and may present with reactive rashes such as Sweet syndrome.

Skin lesions are uncommon in HIV-negative children with talaromycosis. 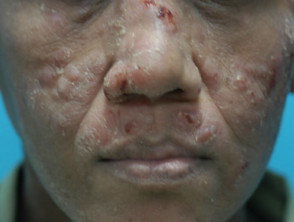 What are the complications of talaromycosis?

Diagnosis of talaromycosis is often delayed, particularly in HIV-negative patients from non-endemic countries. The disease course is rapidly progressive once infection has disseminated.

Disseminated talaromycosis can involve the bone marrow, causing anaemia and thrombocytopenia, and the bones and joints, resulting in osteolytic lesions. In HIV-positive patients, talaromycosis is often associated with other opportunistic infections, such as tuberculous and non-tuberculous mycobacteria, which may obscure and delay diagnosis.

Diagnosis of talaromycosis requires demonstration of the organism. This can be achieved in the following ways.

Once talaromycosis has been confirmed, investigations should be directed at identifying an underlying predisposing cause if not already apparent.

What is the differential diagnosis for talaromycosis?

The differential diagnosis of the skin lesions of talaromycosis depends on the lesion morphology.

Intracellular fungi on histology may be confused with histoplasmosis.

What is the treatment for talaromycosis?

Systemic antifungal drugs are required to treat talaromycosis, with initial high dose therapy followed by prolonged maintenance over many months. Amphotericin B, itraconazole, and voriconazole are the usual agents prescribed.

Prophylactic treatment should be considered for high-risk individuals planning to travel to endemic countries.

What is the outcome for talaromycosis?

Talaromycosis can be rapidly progressive with a high mortality rate if untreated. Even with treatment, it is often fatal; children 55%, HIV-negative adults 30%, and HIV-positive adults 20%.