Chromoblastomycosis is a chronic fungal infection in which there are raised crusted lesions affecting the skin and subcutaneous tissue. It usually affects the limbs.

Chromoblastomycosis may be due to several fungi found in soil, wood and decaying plant material.

The organism is inoculated into the skin by a minor injury, for example, a cut with a splinter when barefoot. It is exceedingly rare in New Zealand, but relatively common in warmer areas such as the Pacific Islands.

The most common organisms are: 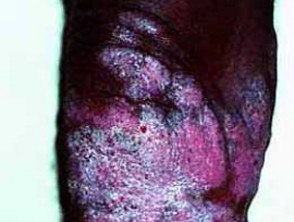 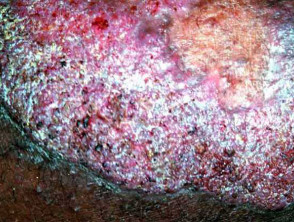 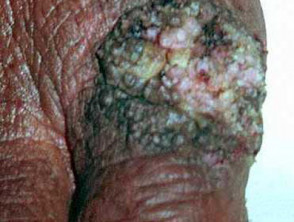 What are the clinical features of chromoblastomycosis?

Chromoblastomycosis generally presents as a single lesion on an exposed site such as the foot or hand.

The infection is sometimes confused with other skin conditions such as:

Microscopy and culture of scrapings or pus swabs suggest the diagnosis. Histopathology of chromoblastomycosis may show typical thick-walled dark-brown cells on skin biopsy confirming the presence of a dematiaceous fungus. It is dark coloured due to melanin in the walls of the organism.

Culture at 25-30 degrees celsius grows olive-green to black fungal colonies after one or two weeks. Naming the responsible fungus can be difficult. Phaeohyphomycosis is the name given to an infection caused by dematiaceous fungi.

What is the treatment for chromoblastomycosis?

Treatment is difficult and prolonged. It may include: