Chromoblastomycosis (chromomycosis) is caused by quite a variety of pigmented fungal species common in soil and plant matter.

Chromoblastomycosis organisms often elicit a profound epidermal hyperplastic reaction which may mimic a squamous cell carcinoma (figures 1, 2). There are often intraepidermal neutrophilic abscesses and transepidermal elimination of inflammatory debris. There is a suppurative and granulomatous response in the dermis (figure 3-6). Eosinophils may be numerous. Later stages often show an impressive dermal fibroplasia.

Within the infiltrate, the organisms can be seen on haematoxylin-eosin sections (figures 3-6, arrows). The organisms are brown, round and have a thick wall. They are thought to represent an intermediate form between hyphae and yeast. The round bodies are sometimes seen fused together as “septate bodies” (figure 4, arrows). 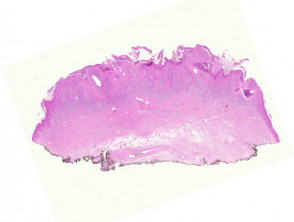 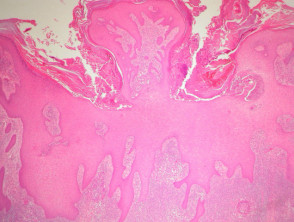 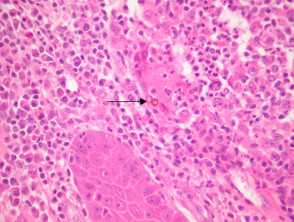 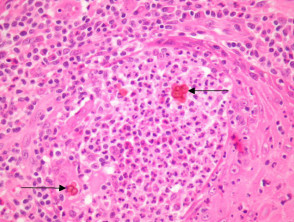 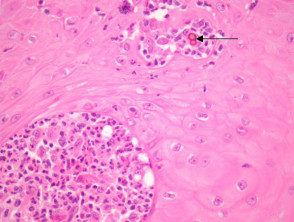 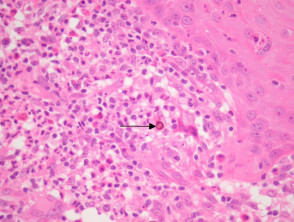 GMS and PAS stains can highlight the fungal forms. The pigment can be appreciated on haematoxylin-eosin sections. Fungal culture can be used to isolate the causative organism.

Squamous cell carcinoma, halogenoderma – The massive epidermal hyperplasia which often accompanies chromoblastomycosis my cause diagnostic confusion with these other diverse pathologic processes.