What is nodular prurigo?

Nodular prurigo is a skin condition characterised by very itchy firm lumps. It is the most severe form of prurigo. It is not known why these lumps appear. It is also called ‘prurigo nodularis’. 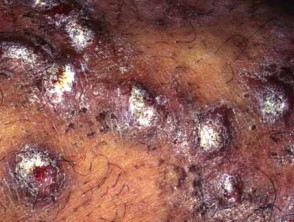 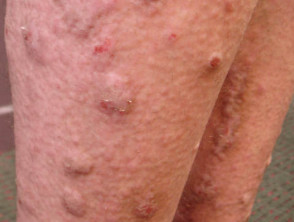 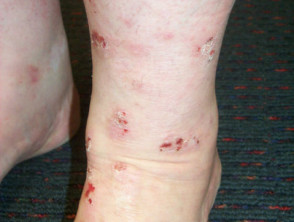 Who gets nodular prurigo?

Nodular prurigo can occur at all ages but mainly in adults aged 20–60 years. Both sexes are equally affected.

Up to 80% of patients have a personal or family history of atopic dermatitis, asthma or hay fever (compared to about 25% of the normal population). It has been associated with internal disease including iron deficiency anaemia, chronic renal failure, gluten enteropathy, HIV infection and many other diverse conditions.

What is the cause of nodular prurigo?

The cause of nodular prurigo is unknown. It is uncertain whether scratching leads to the nodules or if the nodules appear before they are scratched. The reason for the nodules, the inflammation and the increased activity and size of nerves in the skin is under investigation but remains unknown.

Nodular prurigo may commence as an insect bite reaction or another form of dermatitis.

In some cases, nodular prurigo has been associated with brachioradial pruritus, which is due to compression or traction of spinal nerves. This theory may explain why local treatment is not always successful. It has been speculated that widespread nodular prurigo may also follow sensitisation of the spinal nerves and that the nodules appear because of scratching.

What are the clinical features of nodular prurigo?

The individual prurigo nodule is a firm lump, 1–3 cm in diameter, often with a raised warty surface. The early lesion may start as a smaller red itchy bump. Crusting and scaling may cover recently scratched lesions. Older lesions may be darker or paler than surrounding skin. The skin in between the nodules is often dry. The itch is often very intense, often for hours on end, leading to vigorous scratching and sometimes secondary infection.

Nodular prurigo lesions are usually grouped and numerous but may vary in number from 2–200. Nodular prurigo tends to be symmetrically distributed. They usually start on the lower arms and legs and are worse on the outer aspects. The trunk, face and even palms can also be affected. Sometimes the prurigo nodules are most obvious on the cape area (neck, shoulders and upper arms).

New nodules appear from time to time, but existing nodules may regress spontaneously to leave scars. Nodular prurigo often runs a long course and can lead to significant stress and depression.

How is nodular prurigo diagnosed?

In most cases, the diagnosis is made clinically due to the degree of itch and the typical appearance of the nodules.

A skin biopsy may be useful to confirm the diagnosis of nodular prurigo. Under the microscope, the skin is enormously thickened and may appear quite abnormal, sometimes resembling squamous cell skin cancer. The nerve fibres and nerve endings in the skin are markedly increased in size. The skin is inflamed and there is an increased number of neural mediators known to cause itching and nerve growth.

Direct immunofluorescence looking for antibody deposition in the skin is usually negative. Rarely, the blistering disease bullous pemphigoid can present as nodular prurigo (pemphigoid nodularis). In this case, immunofluorescence reveals immunoglobulins in the basement membrane zone below the epidermis. The prurigo nodules can be present for weeks or months before any blisters appear.

It is important to identify underlying diseases that are associated with nodular prurigo; blood tests may include full blood count, liver, kidney and thyroid function tests. Patch testing may be worthwhile if contact allergy is considered possible.

What is the treatment for nodular prurigo?

Unfortunately, nodular prurigo is one of the more resistant conditions skin specialists are called upon to treat. Local treatments that may be tried include:

Antiseptic or antibiotic ointment may be used on infected nodules, and oral antibiotics (usually flucloxacillin) are indicated for significant secondary bacterial infection (cellulitis).

Systemic treatments that may be helpful for more severe disease are listed below, in no particular order. Combination treatment is frequently recommended.

Hope for the future

Clinical trials of a drug called serlopitant for nodular prurigo are on-going. It is a neurokinin (NK)-1 receptor antagonist and shows promise in reducing itch in various skin disorders.