What is uraemic pruritus?

It affects about one-third of patients on dialysis and is more common with haemodialysis than continuous ambulatory peritoneal dialysis (CAPD). 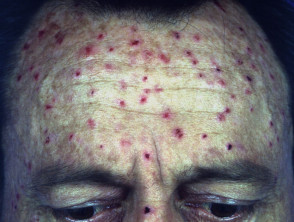 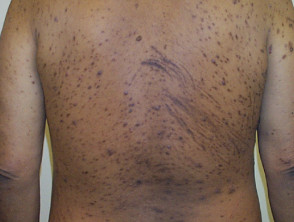 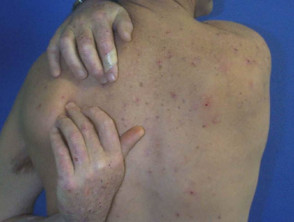 Who gets uraemic pruritus?

The prevalence rates of uremic pruritus are between 20–50% in those with chronic kidney disease, however, the reported rates appear lower in children at approximately 9%.

Uraemic pruritus is not associated with sex, age, ethnicity, duration of dialysis, or cause of renal failure. Pruritus does not arise when uraemia is due to acute renal failure.

Uraemic pruritus is thought to be due to a combination of factors including:

What are the clinical features of uraemic pruritus?

Itch in uremic pruritus most commonly affects the back, however, it can also involve the arms, head, and abdomen. Generalized pruritus is also noted in a proportion of affected patients (20-50%).

Other characteristic features include:

What are the complications of uraemic pruritus?

Uraemic pruritus can be very unpleasant; about half of affected individuals become agitated or depressed. Uraemic pruritus in haemodialysis patients is associated with a 17% increase in mortality.

How is uraemic pruritus diagnosed?

Other dermatological and general metabolic causes of itch may need to be excluded e.g. eczema, scabies, drug-induced reactions, iron deficiency, and thyroid disease.

What is the differential diagnosis for uraemic pruritus?

What is the treatment for uraemic pruritus?

The first step in treatment is optimising dialysis efficacy. It is also important to attempt to reduce serum parathyroid hormone in order to normalise calcium/phosphorus levels. These methods aim to reduce the underlying cause of itch.

Topical preparations for itch are generally sufficient to help improve symptoms, these may include:

UVB phototherapy is the mainstay of treatment for severe uraemic pruritus that has not responded to conventional treatments.

Other treatments that have been reported to help some individuals, include:

Oral antihistamines and systemic steroids are generally not effective.

What is the outcome for uraemic pruritus?

Uraemic pruritus can be difficult to alleviate and patients with pruritus often have decreased quality of life such as poor sleep and depression. In cohort studies, it is associated as an independent predictor of morbidity, mortality, and leads to other poor patient outcomes. One study showed moderate to severe pruritus was associated with a 17% increase in mortality rate.

Kidney transplantation is the definitive treatment and usually results in resolution of uraemic pruritus.