PUVA or photochemotherapy is a type of ultraviolet radiation treatment (phototherapy) used for severe skin diseases.

PUVA is a combination treatment which consists of Psoralens (P) and then exposing the skin to UVA (long wave ultraviolet radiation). It has been available in its present form since 1976.

Psoralens are compounds found in many plants which make the skin temporarily sensitive to UVA. The ancient Egyptians were the first to use psoralens for the treatment of skin diseases thousands of years ago. Medicine psoralens include methoxsalen (8-methoxypsoralen), 5-methoxypsoralen and trisoralen.

For oral PUVA, methoxsalen capsules are taken two hours before the appointment for treatment. For bathwater PUVA, the patient soaks in a bath containing a solution of psoralens. In most cases, treatment is undertaken two or three times each week.

The patient should always wear goggles to protect the eyes from exposure to the radiation.

Usually, he or she is dressed only in underpants for whole-body exposure. Sometimes just arms and legs may be exposed to the radiation, in which case the patient should wear the same clothing each treatment to prevent inadvertently exposing a new area of skin.

The UVA lamps stay on for increasing lengths of time, starting with about one minute and extending for up to half an hour. There may be fans or air conditioning to cool the cabinet, as it tends to get very warm with more prolonged treatment times. 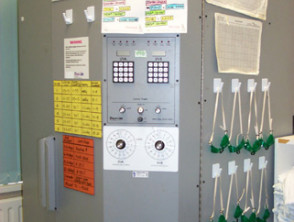 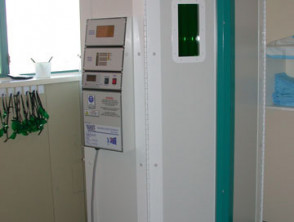 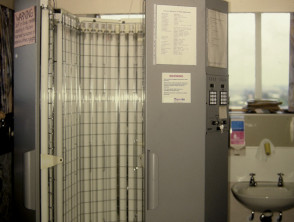 Those patients requiring treatment to small areas only may be treated using a smaller hand and foot unit. Bathwater PUVA may be suitable. In this case, the hands and/or feet are soaked in a dilute solution of methoxsalen for 30 minutes, then immediately exposed to UVA.

A few patients may be treated with topical PUVA — a psoralens lotion or gel is applied to the affected areas 10 minutes before UVA exposure. 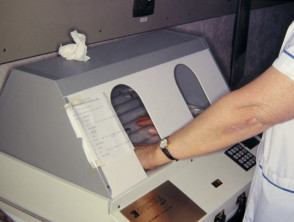 PUVB is the combination of Psoralens and UVB (short-wavelength ultraviolet radiation). This is rarely used, as the wavelength that activates the psoralens most effectively is in the UVA range.

Can sunlight be used for PUVA?

Where PUVA cabinets are unavailable, some dermatologists have recommended patients are exposed to sunlight after taking psoralens by mouth or applying psoralens topically. The oral psoralen has usually been trisoralen as this is slightly safer than methoxsalen.

Unfortunately, sunlight is unpredictable — it is difficult to get the correct dose. Too little, and it is ineffective. Too much, and a nasty blistering burn may occur.

What is PUVA used for?

PUVA may be used to treat various skin disorders, including:

The number and the frequency of PUVA treatments will depend on the condition being treated and individual factors.

PUVA is used infrequently in New Zealand, as narrowband UVB phototherapy has been shown to be nearly as effective. UVB is also less complicated and less risky.

Methoxsalen capsules have been difficult to obtain in New Zealand since 2008.

What are the side effects and risks of PUVA?

PUVA has some risks and side effects.

An overdose of PUVA results in a sunburn-like reaction called phototoxic erythema. It is more likely in fair-skinned patients who sunburn easily. A burn is most likely 48–72 hours after the first two or three treatments.

Sensitive areas such as breasts and buttocks may need to be covered for all or part of the treatment.

If the treated skin becomes pink the dose of UVA should not be increased. One or more treatments may be missed.

Unfortunately, phototoxic erythema can persist for longer than sunburn from natural sunlight. Moisturizers and painkillers can reduce discomfort.

Temporary mild pricking or itching of the skin is common after treatment.

Nausea occurs in a quarter of those treated with psoralens. If it occurs, tell your phototherapy nurse or doctor. Nausea is less if the methoxsalen capsules are taken with food, or the dose is reduced. Antiemetic tablets can be prescribed.

PUVA usually leads to tanning which lasts several months. Although the skin appears brown it may still burn easily on sun exposure. Tanning from UVA is not as protective as tanning from combined wavelengths occurring in natural sunlight.

If the eyes are not protected from UV radiation, keratitis may occur. This results in red sore gritty eyes and can be very unpleasant. Dark wrap-around glasses should be worn for the rest of the day after taking oral psoralens.

Damage to the lens in the eye leading to cataracts is another possible risk.

Extensive PUVA treatment results in premature ageing changes and can increase the chance of skin cancer.

Fair-skinned individuals or those with previous sun or radiation damage are most at risk. This is not a concern for most patients, who receive PUVA therapy for two or three months only.

Patients on long term maintenance therapy should have their skin checked by the specialist at least every 6 months. Bring any new moles, sores which are slow to heal, or growing lumps to the doctor's attention.

Usually, but not always, skin cancers are readily curable. When significant ageing changes are evident or skin cancers occur, it becomes unwise to continue PUVA.

There is no evidence to suggest that PUVA will damage a developing baby. However, should a patient become pregnant, or suspect she is pregnant, during a course of treatment, we advise our patients to stop PUVA treatment immediately.

Psoriasis is a common inherited skin disorder, which may vary considerably in extent and severity. Neither phototherapy nor any other available treatment effects a permanent cure.

PUVA is usually reserved for patients in older age groups, or for those whose psoriasis is either severe or not responding adequately to more conventional forms of treatment. For example, psoriasis with very thick and scaly plaques on trunk and limbs. In approximately 90% PUVA is effective in clearing psoriasis, and can often control it as long as treatments are continued (although this is rarely recommended). Psoriasis in body areas shielded from light (e.g. scalp and body flexures) may not clear satisfactorily with PUVA.

Initially, most patients have their treatment two or three times a week. The first few exposures will be short (less than 5 minutes). The length of exposure is gradually increased, according to the patient's response, up to a maximum of 30 minutes per session. Few patients require such long exposures, most being controlled with shorter times.

Most psoriasis patients will have their psoriasis cleared or much improved after 12 to 24 treatments. At this stage, treatments may be reduced to once a week or less. Even without treatment, the skin may remain clear for some months. However, psoriasis may later flare up again, and PUVA may be recommenced.

Those few cases of psoriasis which appear to be resistant to PUVA may still be helped by combining PUVA with other treatments (e.g. ointments or tablets).

PUVA is occasionally used for severe cases of dermatitis. Frequency and dosage of treatment is similar to that used for psoriasis. However, a course of phototherapy may need to be more prolonged than that generally required for psoriasis.

For this form of cutaneous T-cell lymphoma, PUVA is usually given twice a week at first, using shorter exposures than for psoriasis. When the skin is clear, treatment is given less frequently. If PUVA is stopped, mycosis fungoides sometimes relapses.

Polymorphic light eruption (PMLE) is a common light sensitivity disorder. A six-week course of PUVA in the spring or early summer usually gives patients good protection for the remainder of the summer.

A further course of treatment will be necessary if protection is required in subsequent years.

Patients with vitiligo have areas of completely white skin. PUVA can bring about some repigmentation, particularly for vitiligo of the face, and in dark-skinned patients.

Results for other body sites and white-skinned patients are less encouraging.

Treatment is usually twice a week for two years. Even then, complete repigmentation cannot be guaranteed and relapse is possible.

If you are receiving PUVA therapy, follow the advice of the phototherapy nurse and that of your dermatologist. Some general advice: