What is polymorphic light eruption?

‘Polymorphic’ refers to the fact that the rash can take many forms, although in one individual it usually looks the same every time it appears.

Who gets polymorphic light eruption?

PMLE generally affects adult females aged 20–40, although it sometimes affects children and males in 25% of cases. It is particularly common in places where sun exposure is uncommon, such as Northern Europe, where it is said to affect 10–20% of women holidaying in the Mediterranean area. It is less common in Australasia. It has also been reported to be relatively common at higher altitudes compared to sea level.

PMLE can affect all skin phototypes, though it is more often diagnosed in white skin than in skin of colour. There is a genetic tendency to PMLE, and it is sometimes associated with or confused with photosensitivity due to lupus erythematosus, which generally is more persistent than PMLE.

Some patients experience PMLE during phototherapy, which is used to treat skin conditions such as psoriasis and dermatitis.

Genetic factors may be important with many affected individuals reporting a family history of PMLE.

PMLE is caused by a delayed hypersensitivity reaction to a compound in the skin that is altered by exposure to ultraviolet radiation (UVR). UVR leads to impaired T–cell function and altered production of cytokines in affected individuals. There is a reduction in the normal UV–induced immune suppression in the skin. This has been suggested to be related to oestrogen, insufficiency of vitamin D, or to the microbiome and antimicrobial factors.

The rash is usually provoked by UVA in 75–90% of cases. This means the rash can occur when the sunlight is coming through window glass, and that standard sunscreens may not prevent it. Occasionally, UVB and/or visible light provoke PMLE.

What are the clinical features of polymorphic light eruption?

PMLE may be a rare occurrence or may occur every time the skin is exposed to sunlight. In many affected individuals, it occurs each spring, provoked by several hours outside on a sunny day. If further sun exposure is avoided, the rash settles in a few days and is gone without a trace within a couple of weeks. However, it may recur the next time the sun shines on the skin. If the affected area is exposed to more sun before it has cleared up, the condition tends to get more severe and extensive.

The arms, the back of the hands, the V of the neck, the chest and lower legs/feet may be affected, but the face is usually spared. A few people complain of ocular and/or lip lesions. Juvenile spring eruption is a variant of PMLE that is confined to the ears of children (usually boys).

The most common variety of PMLE presents as crops of 2–5 mm pink or red papules. Other presentations include:

PMLE persists for several days, and often longer if the affected skin is exposed to more sunlight. It resolves without scarring.

PMLE can be the first sign of lupus erythematosus, but this is not usually the case. 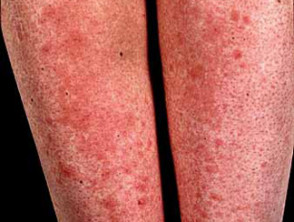 Severe PMLE can lead to emotional distress, anxiety and depression.

How is polymorphic light eruption diagnosed?

PMLE is diagnosed clinically by its typical onset within hours of exposure to sunlight, and clearance after a few days. The rash is confined to exposed sites, and is often composed of erythematous papules and plaques.

Sometimes a skin biopsy is necessary to make a diagnosis. PMLE has characteristic histopathological features, with upper dermal oedema and a dense perivascular lymphocytic infiltrate. Eczematous changes may be present. Direct immune fluorescence is negative, unless the patient has cutaneous lupus erythematosus.

It is usual to have a blood count and a check for circulating antinuclear antibodies (ANA) and extractable nuclear antigens (ENA) in case of photosensitive cutaneous lupus erythematosus.

Phototesting is not usually carried out in patients with PMLE, but provocation tests of exposure to UVA daily for 3 days to a small area of skin can confirm the diagnosis.

How can polymorphic light eruption be prevented?

It is not known how to prevent PMLE altogether. However, many people can avoid developing a rash by using effective sun protection during the middle hours of the day during summer. In New Zealand, patients are advised to dress up during the hours indicated by NIWA's National Climate Database regional Sun Protection Alert, when the UV index is > 3.

Many patients find antioxidant nutritional supplements as a helpful preventative measure. These include:

Some people with PMLE successfully manage to gradually harden their skin to sun exposure.

A short course of oral steroids may be prescribed to reduce the likelihood of breaking out during a summer holiday, but are unsuitable long-term because of their adverse effects and risks.

Hydroxychloroquine is the most common on-going treatment prescribed for severely affected individuals. Immune suppressing drugs such as azathioprine are sometimes used.

What is the treatment for polymorphic light eruption?

The following treatments may reduce the severity and duration of outbreaks of PMLE:

What is the outlook for polymorphic light eruption?

In most individuals, there is a hardening as the summer progresses and more sun exposure can be tolerated without a rash appearing. This does not always occur, and some very sensitive individuals even develop PMLE in the winter.

It has been noted that PMLE appears to be less frequent and severe in women after menopause.