If there is a contraindication to hydroxychloroquine, an alternative antimalarial medication used in dermatology is quinacrine. Due to differences in chemical structure, there is no cross-reactivity between the 4-aminoquinolines (chloroquine and hydroxychloroquine) and quinacrine. An adverse reaction to one does not preclude the use of the other.

Skin conditions that may be treated with hydroxychloroquine 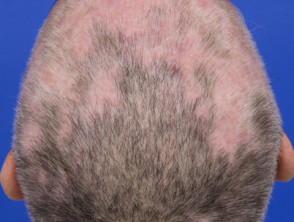 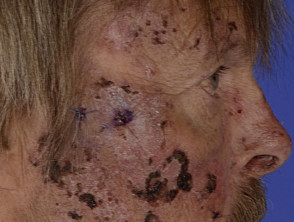 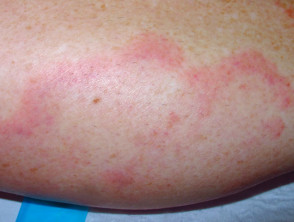 Hydroxychloroquine is used as a first-line medication for the following indications in dermatology:

Hydroxychloroquine is used as a second- or third-line treatment option for the following in dermatology:

Other dermatological conditions where hydroxychloroquine may be considered include:

What are the contraindications with hydroxychloroquine?

The contraindications to hydroxychloroquine include:

Tell me more about hydroxychloroquine

Hydroxychloroquine has a lower risk of ocular toxicity, both corneal and retinal, compared with chloroquine.

Smoking possibly reduces the efficacy of hydroxychloroquine, although studies have not usually confirmed this clinical impression.

Hydroxychloroquine is considered safer than chloroquine during pregnancy and lactation.

Hydroxychloroquine is rapidly absorbed from the gastrointestinal tract, and steady-state concentrations are reached after 4–6 weeks; 45% of hydroxychloroquine binds to plasma proteins that are deposited in tissues such as the liver, spleen, kidney, and lung. There is an unusually high affinity for melanin-containing cells (eg, in the skin and retina). Deposits in these cells can lead to cutaneous pigmentation and possibly retinal toxicity.

After a single dose, hydroxychloroquine is excreted mainly in the faeces, and only 20% is excreted unchanged in the urine. Dose adjustment is therefore only required in patients with severe renal impairment.

How does hydroxychloroquine work?

Anti-inflammatory effects are thought to result through a variety of pathways reducing the cascade of cytokine production and including actions related to an increase in lysosome pH. This causes:

These lysosomotropic effects occur in macrophages, dendritic cells, and lymphocytes. Hydroxychloroquine has a two-fold impact on T cells. It inhibits CD4 T-cell stimulation, but also promotes CD8 T-cell stimulation. The combined effect is a beneficial action in autoimmunity without a penalty of increased opportunistic infections.

Antiproliferative and immunomodulatory effects are mediated by decreasing lymphocyte proliferation, interference with natural killer cell activity, and possibly the alteration of auto-antibody production.

The photoprotective effects of hydroxychloroquine are not entirely understood. Current theories include that the:

Antimalarial medications prevent platelet aggregation and act as prostaglandin antagonists due to the inhibition of phospholipase A2. Therefore, hydroxychloroquine may be used as a life-long therapy for patients with systemic lupus who are at an increased risk of cardiovascular disease.

Other effects of hydroxychloroquine include:

Hydroxychloroquine is dispensed as 200 mg tablets, which is equivalent to 155 mg of the base.

Hydroxychloroquine should be taken with a meal or a glass of milk to minimise the gastrointestinal side effects.

If a therapeutic response is not achieved with hydroxychloroquine alone, adding quinacrine may improve the therapeutic effect.

For the treatment of cutaneous lupus erythematosus, the usual dose range is 200–400 mg daily until a therapeutic response is achieved. Although maximum doses were previously calculated on the patient's ideal body weight and advised not to exceed 6.5 mg/kg/days, dosing is now recommended not to exceed 5.0 mg/kg/days actual body weight. However, this recommendation may require adjustment in obese patients as the maximum daily dose should not exceed 400 mg/days.

To minimise the cumulative dose, which is also believed to be of some importance in the development of retinal toxicity, the dose should be reduced as tolerated (over the winter months).

In the treatment of porphyria cutanea tarda, hydroxychloroquine 100 mg should be prescribed twice weekly for one month, then 200 mg/day until plasma porphyrin levels are normal for at least a month. Initial higher doses may lead to hepatotoxicity as a result of rapid mobilisation of hepatic porphyrin stores.

There are no dosage adjustments provided in the manufacturer’s labelling for renal or hepatic impairment; however, dose reduction may be needed in patients with severe renal impairment.

What are the side effects and risks of hydroxychloroquine?

Hydroxychloroquine can cause irreversible retinal toxicity, resulting in bilateral bull’s eye retinopathy, but is regarded as less toxic to the retina than chloroquine and it does not cause the corneal deposits seen with chloroquine therapy.

Irreversible retinal toxicity from hydroxychloroquine has been recognised for many years, with the bull’s eye retinopathy seen as the end-stage of this process. The high affinity for melanin-containing cells such as those found in the retinal pigment epithelium is hypothesised to be the cause.

Recent research has suggested that damage patterns vary with ethnicity, and those of Asian heritage present with a more peripherally distributed area of damage compared to the classic bull’s eye pattern seen in Caucasian patients.

The risk of retinal toxicity is dependent on several factors:

In 2016, with new scientific data, the American Academy of Ophthalmology revised the screening recommendations for patients being commenced on long-term hydroxychloroquine therapy. A fundus examination alone is insufficient for screening, and further tests are required including at least automated visual field testing and spectral-domain optical coherence tomography.

Every patient should undergo a baseline ophthalmic examination within the first year of commencing hydroxychloroquine if long-term use is anticipated. In the absence of risk factors listed above, annual screening should then be performed after five years.

Sunglasses can be recommended to avoid additional retinal injury due to sun exposure.

Visual symptoms may present as paracentral scotomas (islands of vision loss) when reading. If blurring or vision changes occur, hydroxychloroquine should be ceased, and a careful eye examination conducted.

Nausea, vomiting, and diarrhoea are common side effects, but are usually transient or resolve on the reduction of the dose. They can be minimised by taking the hydroxychloroquine with food.

Blue–grey pigmentation of the skin affects up to 25% of patients taking hydroxychloroquine, especially where there has been bruising. Transverse pigmented nail bands and mucosal pigmentation have also been reported.

Rashes may occur in up to 10% of patients, most commonly morbilliform or psoriasiform. Note that adverse cutaneous  reactions to hydroxychloroquine are reported to affect more than 30% of patients with dermatomyositis, compared to a lower risk of rash in patients with cutaneous lupus erythematosus. If a rash appears, hydroxychloroquine should be withdrawn and may be restarted at a lower dose.

Less common skin side effects may include:

Drug interactions seen with hydroxychloroquine include:

Hydroxychloroquine does cross the placenta and is considered Category D in pregnancy (see DermNet NZ's pages on Safety of medicines taken during pregnancy and on Lactation and medications used in dermatology).

However, in multiple studies, hydroxychloroquine use has not been associated with congenital disabilities, stillbirth, prematurity, low birth weight, fetal death, or retinopathy following maternal intake at recommended doses.

Hydroxychloroquine has been reported to reduce the risk of cardiac manifestations of neonatal lupus in pregnant women with antiSSA/Ro autoantibody-positive systemic lupus erythematosus.

What monitoring is required with hydroxychloroquine?

The amount of monitoring with hydroxychloroquine varies from centre to centre. More frequent surveillance is needed if laboratory values are abnormal or with high-risk patients.

Hydroxychloroquine levels can be measured in the blood. This can potentially be used for monitoring the patient's adherence to treatment and where the response has been inadequate. No standardised effective reference level has been validated. Cohorts with significant improvement or remission of their systemic lupus have had hydroxychloroquine blood levels of >750 ng/mL; a blood level of >500 ng/mL is considered as adherent.