What is a lichenoid drug eruption?

Lichenoid eruptions are uncommon skin rashes that can be induced by many environmental agents, medications or industrial by-products such as inhaled particles. The rash of a lichenoid drug eruption can sometimes be difficult to distinguish from idiopathic lichen planus because of similarities in the clinical appearance and the pathology seen on skin biopsy.

Who gets a lichenoid drug eruption?

Many medications have been reported in association with lichenoid drug eruptions, but often the time between starting the medication and the rash appearing (the latent period) can be long, more than one year in some cases. Generally, the latent period is 2–3 months (although this can vary for different drugs) and has even been reported to develop after the drug has been ceased. This can make it challenging to identify the culprit drug.

Medications commonly reported to trigger a lichenoid drug eruption include:

Other medications that have been reported in association with lichenoid drug eruptions include:

If a lichenoid eruption has developed to a drug, then it is quite possible for the same reaction to appear more quickly after exposure to another medication in the same family. Examples reported have included the proton pump inhibitors (for dyspepsia) and the HMG-CoA reductase inhibitors (for high cholesterol).

The lichenoid drug eruption of hydroxyurea has been reclassified as a drug-induced dermatomyositis.

What are the clinical features of a lichenoid drug eruption?

Lichenoid drug eruptions can look much the same as idiopathic lichen planus although there can be features that may help to distinguish them, which may include: 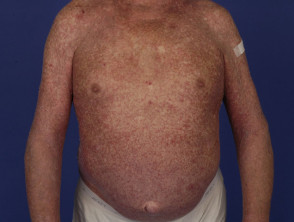 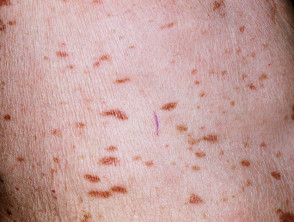 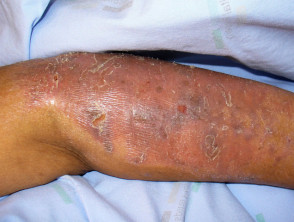 How is a lichenoid drug eruption diagnosed?

The diagnosis may be suspected from the unusual clinical features and a skin biopsy then taken. The pathological features of a lichenoid drug eruption may be difficult to distinguish from idiopathic lichen planus, but the diagnosis of lichenoid drug eruptions may be suggested by the types and distribution of inflammatory cells as well as other changes.

A detailed history of medications taken in the preceding year, including those taken only briefly (or even just once), may help to identify the culprit.

Sometimes patch testing with the drug may confirm the identification, but false negatives are common.

A ‘challenge test’ involves deliberately re-administering the drug to the patient expecting the eruption to reappear, but more rapidly. Sometimes this happens unintentionally when another member of the same class of drugs is given to treat the original medical problem, or the same drug is provided for a different issue.

Ceasing the suspected medication with the resolution of the rash is usually taken as confirmation of the diagnosis and drug trigger.

What is the treatment for lichenoid drug eruption?

The trigger medication should be stopped and should result in improvement in the rash, although it can take weeks to months for it to disappear. Commonly flat pigmented freckles persist and fade more slowly. Nail disease will take six months or more to clear, although improvement can be seen gradually extending over this time.

Sometimes the medication cannot be ceased because of the importance of the underlying medical condition compared to the rash, e.g. imatinib for chronic myeloid leukaemia or gastrointestinal stromal tumour. The dose may be reduced or continued unchanged and the rash treated with topical steroid cream or, if very extensive and severe, oral corticosteroids such as prednisone or prednisolone. Steroids may give good relief or even resolution.