Polymorphic light eruption (PMLE) is a form of photosensitivity, which usually occurs in younger females. It is more common in patients who receive only intermittent sun exposure and typically consists of crops of papules, vesicles or plaques.

In polymorphic light eruption, sections show a superficial and deep perivascular lymphocytic infiltrate (figure 1). There is often impressive papillary dermal oedema (figures 1, 2, 3). When the oedema is massive the lesions may resemble erythema multiforme clinically. The infiltrate is mainly lymphocytic but there may be intermixed eosinophils, neutrophils, and histiocytes (figure 4). The epidermal changes range from being almost normal to showing impressive spongiosis and acanthosis. There are often lymphocytes in the epidermis (exocytosis, figure 3). An interface dermatitis may be seen and associated apoptotic keratinocytes in the epidermis. 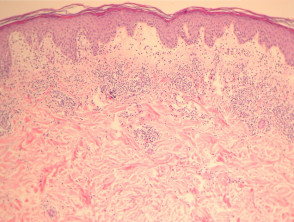 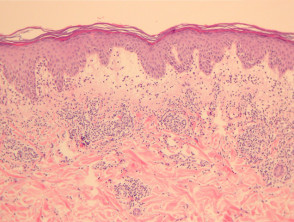 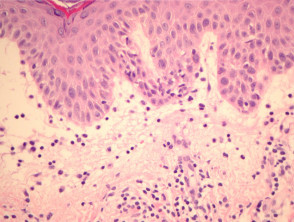 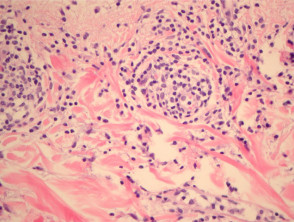 None are generally needed. A mucin stain will be negative and confirm dermal oedema rather than mucin (which would suggest a form of lupus).

Other light eruptions and eczematous reactions – Photoallergic reactions and contact dermatitis can show a dense lymphocytic infiltrate to resemble PMLE. The clinical presentation and the presence of massive dermal oedema can be helpful features

Lupus – Lupus will also show a superficial and deep dermatitis but there is also often basement membrane thickening and dermal mucin.

Juvenile spring eruption of the ears – Is likely a form of PMLE.