Nemolizumab received its first approval in Japan in 2022 (Mitchga®) for those aged 13 years and over to treat severe atopic dermatitis.

In 2019, the U.S. Food and Drug Administration (FDA) awarded Galderma with a Breakthrough Therapy designation to investigate nemolizumab in treating pruritus associated with prurigo nodularis. Studies on efficacy and safety are currently underway.

Nemolizumab is a monoclonal antibody that acts as an interleukin 31 (IL-31) antagonist. Clinical trials have shown that nemolizumab effectively disrupts the itch-scratch cycle in chronic pruritic skin conditions.

What is nemolizumab used for? 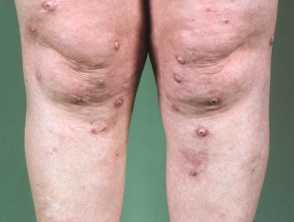 Nodular prurigo on the shins 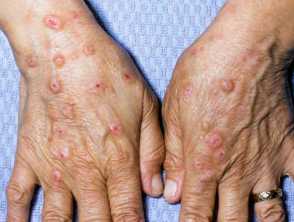 Prurigo on the dorsal hands in skin of colour 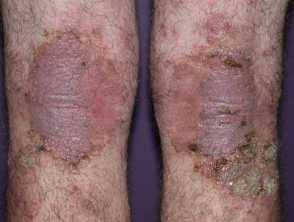 Nemolizumab is administered as a subcutaneous injection.

The dose approved in Japan for atopic dermatitis treatment is 60mg subcutaneous injection administered at intervals of four weeks.

Use in specific populations

Use in paediatric patients for atopic dermatitis

In an open-label phase II clinical trial (Sidbury et al, 2022), 20 adolescent patients (mean age 14.8 years) with moderate to severe atopic dermatitis received a loading dose of 60 mg nemolizumab and a maintenance dose of 30 mg four weekly for 12 weeks, along with background use of topical corticosteroids or topical calcineurin inhibitors.

Use in uraemic pruritus secondary to chronic kidney disease

Patients with chronic kidney disease may experience severe uraemic pruritus. The pathogenesis of uraemic pruritus is unknown, but interleukin 31 (IL-31) is suspected to be involved.

What are the adverse effects of nemolizumab?

Serious adverse events that occurred in patients taking nemolizumab in clinical trials accounted for less than 5% of reported adverse events, and included:

Ongoing phase III trials will further explore the safety and efficacy of nemolizumab in treating prurigo nodularis and atopic dermatitis.

Currently, there are no formal drug interaction studies associated with nemolizumab.

What are the contraindications with nemolizumab?