What is reflectance confocal microscopy?

In dermatology, reflectance confocal microscopy (RCM) is a non-invasive imaging technique that enables in vivo visualisation of the epidermis down to the papillary dermis in real-time. Resolution is almost comparable to conventional histology. It has the advantage of allowing the clinician to do a “virtual biopsy” of the skin and obtain diagnostic clues while minimising unnecessary skin biopsies.

The confocal microscope was invented by Prof Marvin Minsky in the mid-1950s. RCM in skin imaging was later described by Dr Rajadhyaksha and his colleagues in 1995. Since then, there has been a lot of interest in using this technique in the diagnosis of skin malignancies such as melanoma and in inflammatory skin conditions.

How does reflectance confocal microscopy work?

RCM uses the diode laser as a source of monochromatic and coherent light.

RCM relies on reflectance (back-scattering) of light from structures with endogenous contrast, such as melanin, haemoglobin and some organelles. Reflectance occurs at the boundaries of two structures with different refractive indices, such as membranes, keratohyaline granules and melanosomes.

The commercially available Vivascope® 1500 uses a laser of 830 nm, as this wavelength does not cause tissue injury for the patient or injury to the eyes of the operator. The depth of penetration is 200–300 µm, which generally corresponds to the papillary dermis or upper reticular dermis. 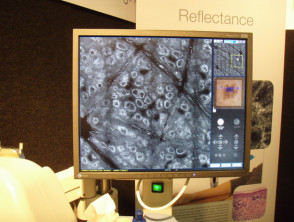 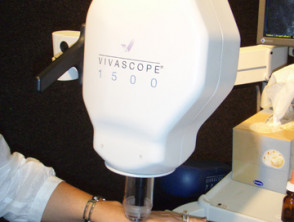 How is reflectance confocal microscopy used?

RCM is a painless procedure.

RCM allows horizontal scanning of the imaged tissue at a pre-selected depth.

The RCM device has an attachment for a dermatoscope. This allows dermatoscopic-confocal microscopy correlation. Video of capillary blood flow can also be filmed.

What are the potential clinical applications of reflectance confocal microscopy?

RCM can be used to diagnose benign and malignant skin lesions, such as:

RCM can be used to monitor treatment, such as:

A consensus group determined that the best indications for the use of RCM are (Jan 2017):

RCM can also be used to diagnose inflammatory conditions, such as:

What features can be seen in normal skin using RCM?

Early melanoma is characterised by:

Features of more advanced melanoma are:

Histology and dermoscopy of a benign keratosis 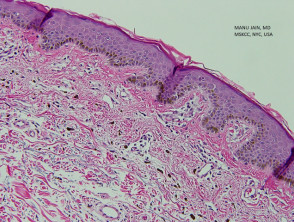 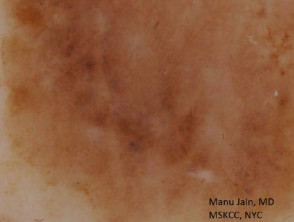 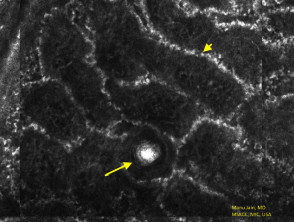 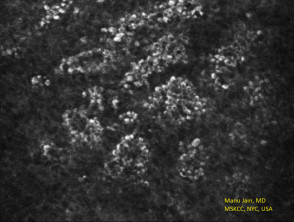 Figure 1. RCM image of a benign keratosis at the dermo-epidermal junction shows round to polymorphous edged papillae surrounded by a rim of bright monomorphous cells (arrowhead) and a corneal pseudocyst (arrow).

Figure 2. RCM image of a benign keratosis at the suprabasal part of the epidermis shows a cobblestone pattern: closely set, bright round cells even in size and brightness with uniform spacing separated by a less refractive polygonal outline.

The features of squamous cell carcinoma (SCC) are:

Inflammatory diseases can be grouped into 4 main categories.

Features of chronic plaque psoriasis are:

Spongiotic dermatitis is characterised by:

In the commercially-available confocal microscope, the depth of imaging is 200–300 µµm, which corresponds to the papillary dermis. Therefore lesions or inflammatory processes that are deeper than that cannot be assessed.