In juvenile xanthogranuloma, the lesion begins as a dense lymphohistiocytic proliferation of dermis with rare giant cells. As it evolves, the dermal tumour contains a population of foamy histiocytes and giant cells (figures 1–3). Touton giant cells are quite characteristic of juvenile xanthogranuloma (best seen in figure 3). These cells contain a ring of nuclei surrounding a central homogeneous cytoplasm, while foamy cytoplasm surrounds the nuclei. Later the cells become more spindled and fibrohistiocytic-like. 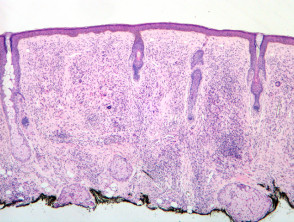 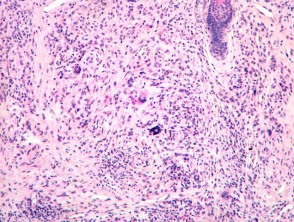 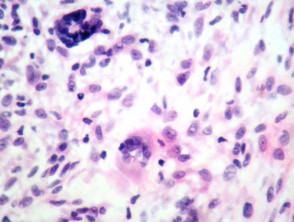 Immunohistochemistry can be used. Typically the tumour is positive with CD68, alpha-1-antichymotrypsin, lysozyme, vimentin, and Factor XIIIa. Useful negative stains include S100 and CD1a.