Kaposi sarcoma is grouped within vascular tumours of variable malignant behaviour. The histology is typically very distinctive. The features change depending on the nature of the lesion clinically as it progresses from the patch to plaque to nodular phase.

The low power view of the histology of Kaposi sarcoma is of a cellular dermal nodule (Figure 1). There may be varying degrees of overlying epidermal changes which can range from prominent hyperkeratosis and acanthosis to frank ulceration. The dermal proliferation is comprised of a spindle cell proliferation of endothelial cells forming sinuous vascular spaces. These may be sparse in patch phase lesions, progressing to fascicles of spindle cells in nodular lesions (Figures 2,3). This fascicular pattern has been likened to schools of fish. The spindle cells infiltrate through the collagen, forming slit-like spaces, especially towards the periphery of the lesions (Figure 4). Where the newly formed vessels project into an existing space the promontory sign is seen (Figure 5). This is now recognised as not being specific to this condition.

In plaque and nodular stage lesions, there may be visible intracellular and extracellular hyaline globules, though to represent engulphed erythrocytes. While rare this may be seen in patch stage lesions. They stain PAS positive. While the endothelial proliferation is frequently monomorphic, there may be significant nuclear atypia with increased mitotic activity (Figure 6). When prominent atypia is seen the tumour fits into the category of an anaplastic variant.

The inflammatory infiltrate is predominantly lymphocytic with scattered plasma cells also a clue to this diagnosis. Erythrocytes are seen within the slit-like spaces and throughout the tumour. Sometimes at the base and periphery of nodular Kaposi, there may be large cavernous vessels. 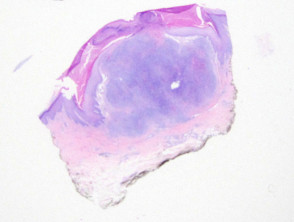 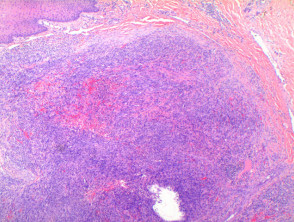 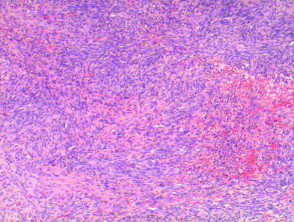 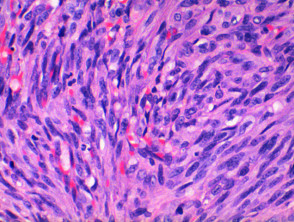 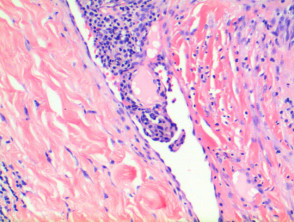 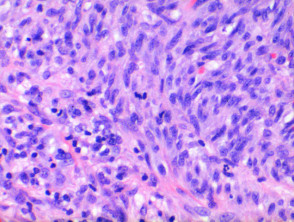 Numerous pathological variations for Kaposi sarcoma have been described depending on the nature of additional associated features or pattern of the dermal proliferation. They are largely intuitive from the description of the lesion. Reported variants include:

Lesional cells in Kaposi sarcoma are positive to the non-specific endothelial markers CD31 (Figure 7) and CD34, and also to the lymphatic endothelial marker D2-40 or podoplanin. The antibody to HHV-8 (Human Herpes Virus 8) latent nuclear antigen 1 is a highly specific commercial stain and has simplified the diagnosis in difficult cases. Figure 8. 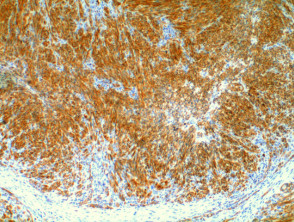 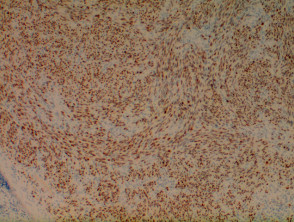 Microvenular haemangioma: This vascular tumour can be difficult to discriminate from early patch stage lesions clinically. Less well-formed vessels, presence of nuclear pleomorphism and positive immunohistochemistry to HHV-8 is consistent with Kaposi sarcoma.

Tufted haemangioma: Multiple lobules of spindle cells are seen, but they lack the interlacing pattern of Kaposi sarcoma nor the slit-like vascular channel formation.

Cavernous haemangioma: This may be considered when dilated vessels are present at the base or periphery of nodular stage lesions, but this haemangioma lacks a spindle cell component.

Pyogenic granuloma: Typically only an issue in partially biopsied lesions where only the superficial component of the lesion is demonstrated.