Histologically, keratosis lichenoides chronica is characterised by a lichenoid reaction pattern with marked basal cell death and vacuolar degeneration (figures 1-3). The dermal infiltrate shows a mixture of cells which may include plasma cells. The epidermal changes are highly variable — acanthosis, parakeratosis, and atrophy are all described features. Cornoid lamellae and eccrine infiltrates have been described. 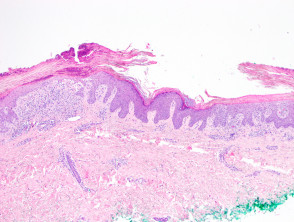 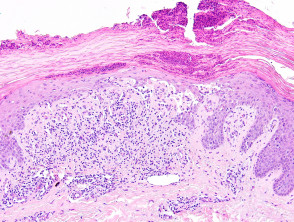 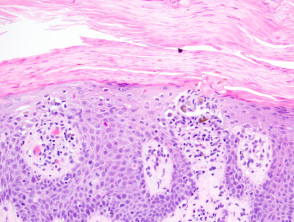 None are generally needed. PAS stain may be useful to exclude a superficial fungal infection.

Diagnosis is difficult without clinical correlation. Some authors feel this is likely an unusual chronic form of lichen planus.

Pityriasis lichenoides can show a similar pathology but has a distinct clinical presentation.