Leukocytoclastic vasculitis is a vasculitis of the small vessels and is also described as a hypersensitivity vasculitis.

Low power view of leukocytoclastic vasculitis gives the pattern of a busy dermis with a superficial and mid perivascular inflammatory pattern (Figure 1). There is a population of predominantly neutrophils in a perivascular and interstitial pattern in addition to those undergoing extravasation from the vessels (Figure 2 and 3). Leukocytoclasis (neutrophil degeneration) forming nuclear dust is seen in addition to extravasated erythrocytes (Figure 3 and 4). Fibrinoid necrosis of the vessels with fibrin extravasation, while a pathogenic requirement, may be poorly visible or absent in many cases (Figure 3 and 4 demonstrate mild fibrinoid necrosis).

A variable number of eosinophils can be seen and when increased in number may suggest a drug as an underlying cause.

It is important to recognise that the changes vary with the timing of the biopsy, with significant variation seen in the degree of inflammatory infiltrate and vessel wall damage. 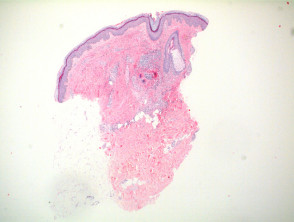 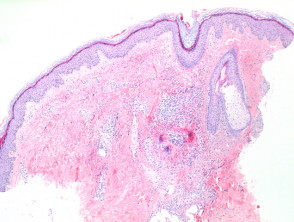 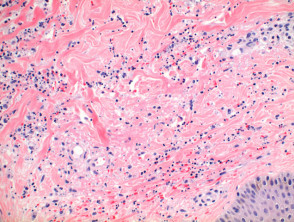 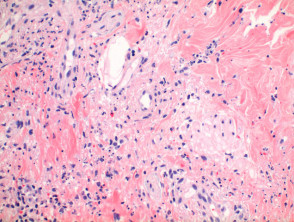 Immunofluorescence may be useful to confirm vascular damage as deposition of fibrinogen, C3, IgG and IgM can be seen within vessel walls. Biopsy of involved skin has a higher yield.

Positive IgA is also useful as a clue to Henoch Schönlein Purpura.

Henoch Schönlein purpura: The histology is identical. IgA deposition on immunofluorescence will confirm a clinical diagnosis, but IgA positivity is not synonymous with the diagnosis as IgA can be seen in other scenarios also.

Urticarial vasculitis: While the changes may be very similar in this condition, typically there is more prominent superficial dermal oedema, and the density of the inflammatory infiltrate is less. In particular there may be a less obvious neutrophilic component with even a pure lymphocytic vasculitis argued by some as sufficient for the diagnosis.

Septic vasculitis: Here the clue is vascular occlusion by thrombus. There may be little if any leukocytoclasis.

Sweet syndrome: The presence of notable papillary dermal oedema and a diffuse neutrophilic infiltrate in Sweets should be discriminatory. While strictly it is suggested there should be no significant fibrinoid necrosis this has been documented in a minority of cases.