Lymphomatoid papulosis is one of the two primary cutaneous CD30-positive cutaneous lymphoproliferative disorders, as classified by the WHO/EORTC. Six histological types have been described.

Scanning power of the pathology of lymphomatoid papulosis reveals a wedge-shaped inflammatory infiltrate extending to the deep dermis or superficial subcutaneous tissue (Figures 1 and 2). Note, it is made of prominent telangiectatic vessels and extravasation of erythrocytes in the case illustrated here (Figures 3 and 4). The lymphocytic population is comprised of a number of large CD30-positive lymphocytes (Figure 5). The mixture of cells forms a spectrum.

Type A: Scattered or grouped large CD30-positive lymphocytes (Figure 6) in a background of eosinophils and neutrophils.

Type B: A population of small lymphocytes may be seen with epidermotropism. This type may resemble mycosis fungoides. 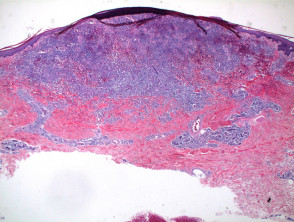 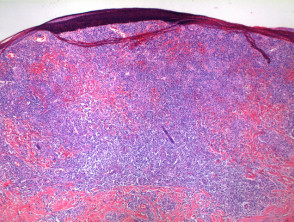 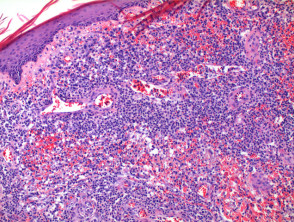 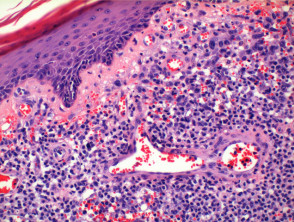 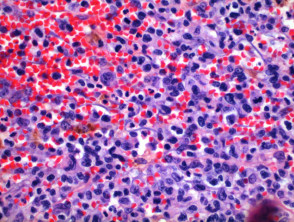 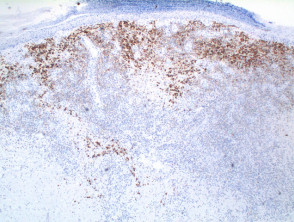 A panel of immunoperoxidase markers is used, the key finding is CD30 positivity in Types A and C. Typically the tumour cells are CD4+, but CD8+ and CD56+ variants have been described. TIA-1, perforin, and granzyme-B is expressed while ALK-1 is negative.

Fascin expression may indicate an increased risk for secondary malignancies.

Pseudolymphomatous drug eruption and arthropod bites present with scattered CD30+ lymphocytes, largely not forming clusters or sheets. There is a mixed plasma cell and B-cell population.