Mycosis fungoides is the most common form of cutaneous T cell lymphoma. It is characterised by infiltrates of lymphocytes and an indolent clinical course, usually slowly progressing from patches to thicker plaques and eventually to tumours.

Patch stage mycosis fungoides: there is a superficial lichenoid infiltrate, mainly of lymphocytes and histiocytes and a few atypical cells infiltrating the epidermis without significant spongiosis (a phenomenon which is known as 'exocytosis', figure 1). This stage may be very subtle histopathologically and mimic other dermatoses such as eczema or lichenoid dermatoses, as the atypia may be difficult to appreciate. Often multiple biopsies are required to make the diagnosis and numerous studies may be needed to isolate or prove a clonal proliferation of T-cells.

Plaque stage: as mycosis fungoides progresses, there is more obvious epidermotropism (figure 2) and a denser dermal infiltrate. There may be intraepidermal collections of atypical cells (Pautrier microabscesses, figure 3).

Tumour stage: when tumours start to form clinically, histopathology shows a much denser dermal infiltrate (figure 4). There may be no exocytosis of lymphocytes in this stage. Transformation to large cells may occur (figure 5).

There are numerous clinical and histopathological variants of mycosis fungoides including a folliculotropic variant (figure 6), a granulomatous variant (granulomatous slack skin syndrome), and variants that mimic common dermatoses such as pigmented purpuric dermatitis and vitiligo. 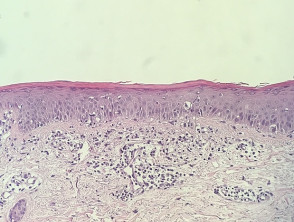 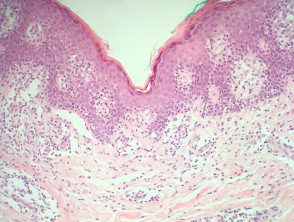 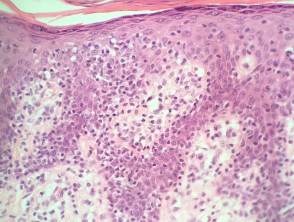 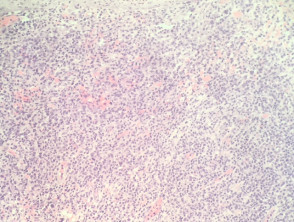 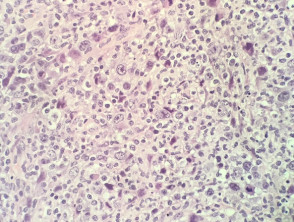 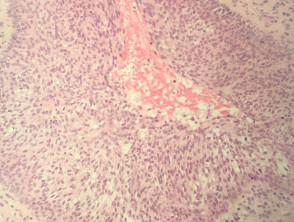 In challenging cases it can be useful to prove the presence of clonal proliferation of T-cells to make the diagnosis. This can be done with immunohistochemistry and T-cell gene rearrangement studies.

Immunohistochemistry: Mycosis fungoides usually shows a predominance of CD4+ T -ells with fewer CD8+ cells (though CD8 variants do exist). The ratio of CD4/CD8 can be assessed and if there is restriction of one type this would indicate evidence of clonality. CD4 can also be useful to highlight the degree of T-cell infiltration into the epidermis. Clonal T cells also often lose T-cell marker; malignant T-cells a sometimes negative for CD7 and CD5.

The differential diagnosis for mycosis fungoides