Malassezia folliculitis is likely caused by Malassezia globosa in the majority of cases. Follicular occlusion may be the primary pathology. Overgrowth of yeast probably follows as a secondary process.

The follicles are often plugged but there is minimal other epidermal change. There is a suppurative folliculitis, primarily involving the infundibular portions of the hair follicle (figures 1, 2, 3 show the same process at progressively higher magnification). PAS stain reveals numerous oval yeast-like organisms within the follicle and often in the surrounding dermis (figure 1, inset). The yeasts have been compared to a “clown with clown nose” as there is often small budding of the yeast-like forms (figure 1, arrow). The surrounding dermis shows a reactive inflammatory reaction which may be exuberant if there is follicular rupture. 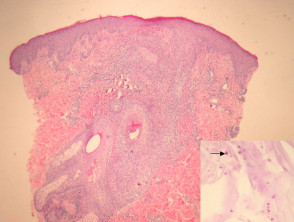 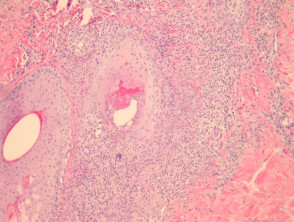 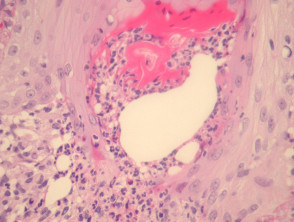 PAS or GMS is typically required to demonstrate the malassezia yeast. The morphology of the organism can be seen in figure 1.

Bacterial folliculitis – Morphologically identical, but without the causative organisms. Malassezia folliculitis is likely under-diagnosed as it will only be recognised if stains are done on all cases of suppurative folliculitis

Majocci granuloma – Rather than yeast-like forms, dermatophytes will be seen within follicular structures with special stains. The process is typically a deep folliculitis rather than the superficial process seen with malassezia folliculitis.