What is a milker's nodule?

A milker's nodule is an infection of the skin caused by a virus that infects the teats of cows. It is sometimes called cowpock although it is important to note this is a different condition from cowpox (in recent reports from Europe, cowpox has been acquired from cats and small rodents rather than cows).

Milker's nodule is a farmyard pox and is also called paravaccinia, pseudocowpox and milkers' node.

Milker's nodule is caused by a parapoxvirus. It produces mild infections of the teats of cows, i.e. ring sores, as well as ulcers in the mouths of calves. It is similar to bovine papular stomatitis virus, which affects the same sites in cattle. The two viruses are variants. Both can produce lesions on the hands of dairy farmers or vets who examine the mouths of animals. Human infection is from contact with infected lesions on the animals. Any human-to-human spread appears not to have been recorded. Orf is another parapoxvirus that affects sheep and goats.

After an incubation period of 5-14 days small, red, raised, flat-topped spots develop. Within a week they appear as red-blue, firm, slightly tender blisters or nodules (lumps), usually between 2 and 5 in number although they may be solitary or more numerous. The nodules are usually on the hands, particularly the fingers, but occasionally the face. The top of the nodules often develops a greyish skin and a small crust. Secondary bacterial infection can develop. Many patients develop red streaks up the lymph channels on the arms (lymphangitis) and some enlargement of the lymph glands. 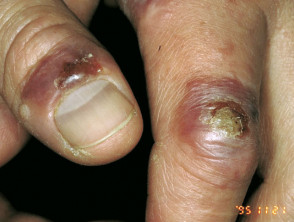 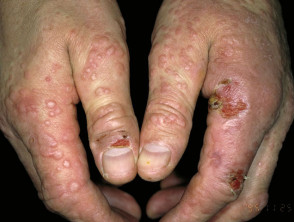 It is difficult to reliably distinguish milker's nodules from orf, the related condition in sheep, but the appearance of the nodules, number of lesions and whether cows or sheep are being mainly contacted is a guide.

One or two weeks after the appearance of the milker's nodules, some patients develop erythema multiforme. This presents as an eruption of small raised spots or blisters on the hands, arms, legs and neck. This rash fades in 1–2 weeks.

How is the diagnosis of milker's nodule made?

In those at risk of the infection by their occupation, the diagnosis is made by the typical appearance of the lesions. A skin biopsy may be necessary. The characteristic pathological features of farmyard pox are epidermal hyperplasia, marked swelling of the dermis, intraepidermal and subepidermal blistering, and a dense mixed inflammatory infiltrate.

What is the treatment of milker's nodule?

Milker's nodules can just be left to resolve spontaneously over 4-6 weeks. They should be covered to prevent contamination of the environment and also potential spread to other people. Gloves should be worn if milking. Any secondary bacterial infection should be treated.