Mucormycosis is a fungal infection caused by organisms of the Mucorales order. Rhizopus species are the most commonly involved. Lichthemia (formerly Absidia) and Mucor are other less common causes.

The fungal forms of mucormycosis are broad, non-septate hyphae (figure 1). They are wider than Aspergillus species and branch irregularly. The angle of branching is greater than other organisms, and usually approaches 90° (figure 2, arrow) 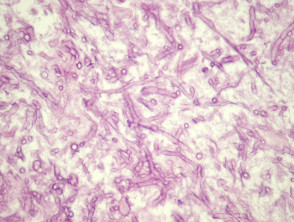 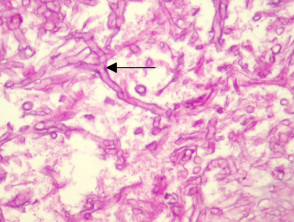 Mucormycosis organisms may easily be seen on haematoxylin and eosin sections (figure 1). Special stains with PAS (figure 2) or GMS can be used to highlight the organisms and allow a clearer assessment of the morphology.

Aspergillosis – Aspergillus species have thinner septate hyphae with regular branching and they branch at acute angles (45° as opposed to 90°).