Aspergillus species can cause invasive cutaneous infections, particularly in immuno-suppressed hosts. The organism may be introduced from local inoculation or arrive in the skin following dissemination from the lungs.

The inflammatory pattern to the fungal forms of aspergillosis depends on the depth of invasion and the immune status of the patient.

More commonly, there is a dense acute infiltrate in the dermis and deep soft tissue (figures 3, 4) which may be associated with necrosis and scarring. The organisms may sometimes be seen on close examination with routine H-E staining (figures 2, 4). With special stains, the morphology is better appreciated and shows thin, septate hyphae with regular branching (figures 5, 6). The angle of the regular branching is approximately 450 (figure 5, arrow).

There may be angioinvasion, ulceration and extensive necrosis. In immune competent patients, a dense granulomatous response is common. Direct skin inoculation can cause a marked epidermal response. 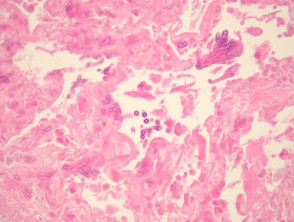 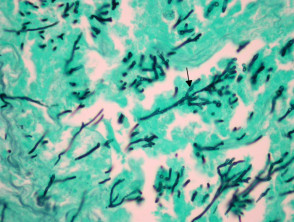 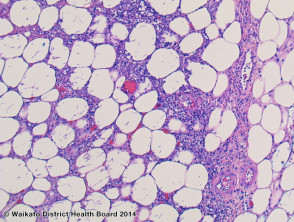 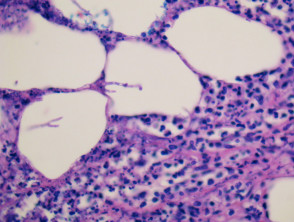 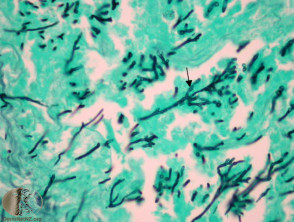 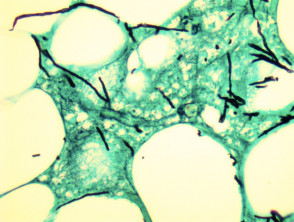 The organisms may easily be seen on haematoxylin and eosin sections (figure 1). Special stains with PAS or GMS (figure 2) can be used to highlight the organisms and allow a clearer assessment of the morphology. Correlation with tissue cultures is helpful.

Mucormycosis – Aspergillus species are thinner, septate, with regular branching and branch at acute angles when compared with the organisms of mucormycosis (45° as opposed to 90°).

Fusariosis, Pseudallescheriosis – These organisms can have a similar morphology to aspergillosis, and usually require culture to allow precise distinction.