Neurocristic hamartoma presents as a slowly enlarging multinodular variably pigmented plaque. It most commonly presents in the head and neck region but has been described arising in a diverse range of sites. Malignant transformation is a well-described complication.

In neurocristic hamartoma, the histopathology shows a lesion composed of various components of neural crest origin, typically melanocytes, stroma and peripheral nerves. Low power examination shows a lesion which extends deep in to the dermis, involves the subcutis (figure 1), and surrounds the hair follicles (figure 2). Closer examination shows areas with epithelioid melanocytes with heavy pigmentation (figure 3). In other areas there is a mixture of fibrous areas and peripheral nerve differentiation. Sometimes, the epithelioid areas can show a degree of nuclear atypia and even frankly malignant nuclear changes. 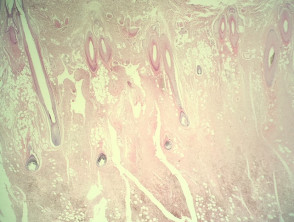 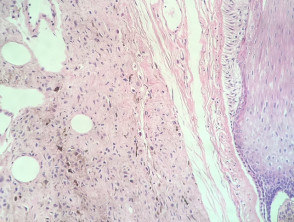 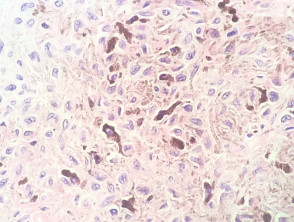 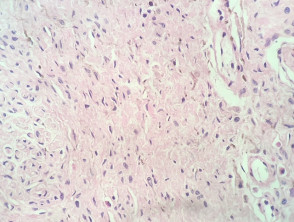 Immunohistochemistry demonstrates that the areas with melanocytic differentiation are positive with Melan-A, S100 and often with HMB-45. The neural areas are negative with Melan-A and HMB-45 but show S100 reactivity. Fibrous regions of the lesion are negative for all of these markers.