Pilomatricoma is a tumour thought to arise from the cells of the hair matrix.

At low power the histological pattern seen in pilomatricoma is of a well-circumscribed nodulocystic tumour (Figure 2). While predominantly seen within the lower dermis, extension into the subcutaneous tissue is not uncommon. The tumour is comprised of a basaloid proliferation resembling the hair matrix cells, which matures into structureless eosinophilic cells lacking nuclei called shadow cells (Figures 3 and 4). The shadow cell area represents differentiation towards the hair cortex. Frequently there are areas of calcification within the shadow cell regions (Figure 5). A histiocytic infiltrate with multinucleated cells forms at sites of rupture (Figure 6). 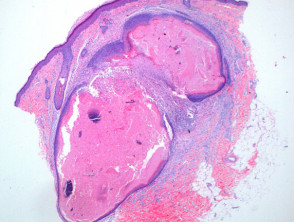 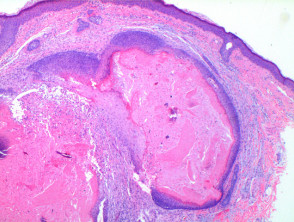 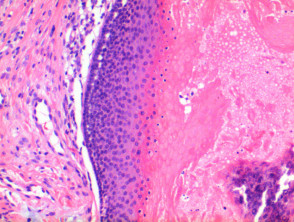 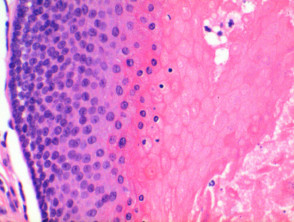 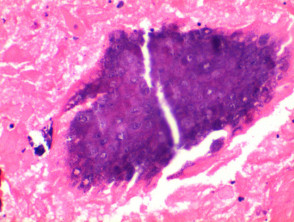 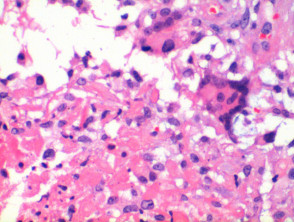 Typically no special stains are necessary to make this diagnosis. Von Kossa stain will highlight areas of calcium deposition.

Pigmented pilomatricoma: This variant is due to increased melanin deposition or prominent hyperplasia of melanocytes and is seen in up to 11% of cases. Melanocytes are normal residents within the hair matrix and so is an expected finding in small numbers within the basaloid proliferation. Melanocytic hyperplasia though is unexpected and has been postulated to be secondary to UV stimulation.

Matricoma: First described by Ackermann, it is a tumour of the same cellular constituents, but varies by its silhouette. It is largely a nodular or multinodular predominantly basaloid tumour, which lacks the typical central cystic component, and is described as having small areas of shadow cell formation only.