Pilonidal sinus is a common condition typically affecting the region of the base of the spine or the intergluteal cleft. Other anatomic sites have been rarely reported. It is regarded by many authors within the “follicular occlusion tetrad” as the primary process appears to be follicular occlusion.

Sections show a dense inflammatory reaction usually occupying the entire dermis with erosion and ulceration of the overlying epidermis (figure 1). Free hair shafts are often seen coursing through the inflammatory focus (figure 2, arrow). Often, the free hair shafts are seen in clusters (figure 3). Dye used to outline the sinus tract for the surgeon may sometimes be seen. Surrounding the free hair shafts is a polymorphous infiltrate which may be rich in plasma cells and lymphocytes (figure 4). Foreign body-type giant cells and neutrophilic abscesses are also commonly observed. 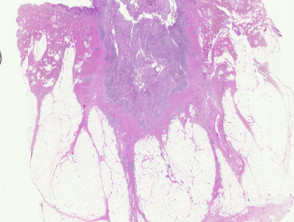 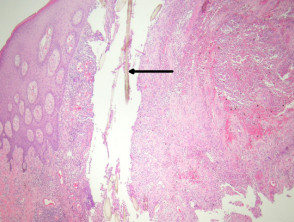 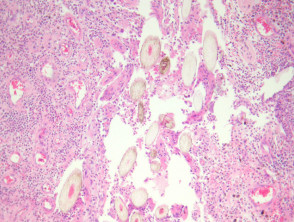 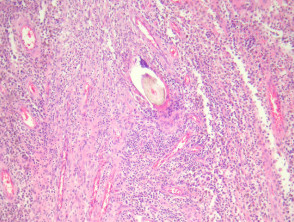