As with erythrasma, the causative organism of pitted keratolysis is typically a Corynebacterium. Other organisms have also been implicated, including Dermatophilus congolensis, and Micrococcus sedentarius.

As with erythrasma, the inflammatory reaction in pitted keratolysis is minimal and thus the process can be easily missed entirely histopathologically. On careful examination, dense groups of the bacteria can be identified in the stratum corneum of acral skin. The organisms are typically both filamentous and coccal. Special stains with either a gram stain or a Steiner stain (figure 1) will intensely stain the causative organism. 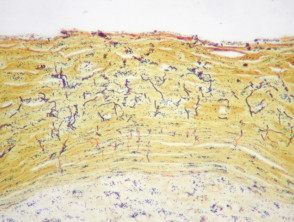 Similar to erythrasma, gram stain of pitted keratolysis shows gram-positive coccal forms and filaments in the stratum corneum. Steiner stain may also highlight the organisms as seen in figure 1. Sometimes the organisms may be obvious on routine H-E sections. Culture studies may also be helpful in some cases to confirm the causative organism.

Pityriasis versicolor (sometimes called tinea versicolor) – Malassezia (formerly known as Pityrosporum) yeasts colonise the stratum corneum and also fail to elicit much of an epidermal response. The yeast forms are larger than Corynebacteria and fail to stain with gram stain

Normal skin – The causative organisms can be easily overlooked

Erythrasma – This may be indistinguishable without clinical correlation.