The low power view of pityriasis versicolor is suggestive of a mild superficial perivascular inflammation pattern (Figure 1). The epidermis may show mild hyperkeratosis and acanthosis (Figure 2). Elongation of the rete ridges and mild increased basal layer pigmentation as seen in acanthosis nigricans can sometimes be observed.

In pityriasis versicolor, the organisms are seen almost exclusively within the stratum corneum, and are readily seen on haematoxylin and eosin sections (Figures 2, 3). The characteristic spores and short ‘cigar-butt’ hyphae of Malassezia furfur are likened to spaghetti and meatballs (Figure 4). A mild superficial perivascular lymphocytic infiltrate, rarely with plasma cells, is seen. 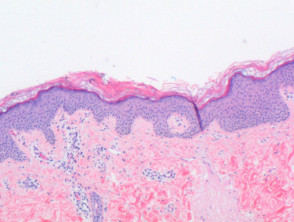 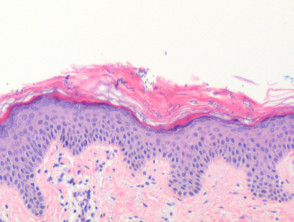 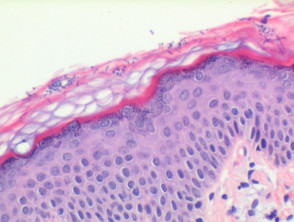 Periodic acid-Schiff (PAS) and methenamine silver stains can improve the visualisation of the organisms within the stratum corneum.

While the presence of the characteristic fungal forms in the appropriate clinical setting is diagnostic, when there are few fungal elements consideration should be given to: