Pleomorphic-Hyalinising Angiectatic Tumour (PHAT) is a rare low-grade neoplasm which most commonly presents in adults as a slow-growing subcutaneous mass. As PHAT tends to be infiltrative, it is prone to local recurrence. Metastasis has never been reported.

There have been reports of PHAT recurring as overt sarcoma, but it is unclear whether these cases were misdiagnosed or whether evolution into overt sarcoma may occur.

Microscopically, PHAT is characterized by thin-walled, hyalinised and dilated blood vessels (figures 1, 2). Surrounding these is a stroma containing tumour cells which are plump spindled or ovoid cells with pleomorphic nuclei and occasional nuclear pseudoinclusions (Figures 2-3). Mitotic figures are rarely found. There may be extensive hemosiderin deposition (figure 3). 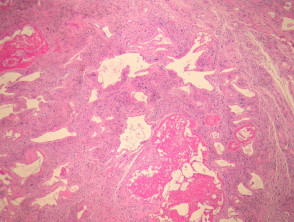 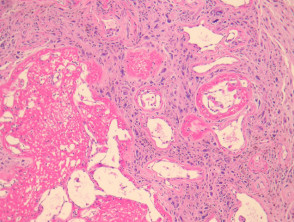 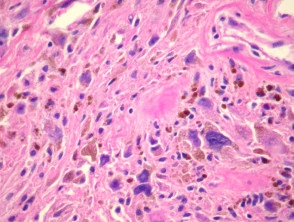 Vimentin, CD34 and factor XIIIa may be positive in PHAT. There is no staining with S100 protein.

Schwannoma – These are S100 positive