Sebaceous carcinoma arises from ocular adnexa or sebaceous glands of the skin. The clinical course seems to range from indolent to highly aggressive depending on the grade of the tumour and the anatomic site (ocular tumours are thought to be more aggressive). Muir-Torre patients are at risk for development of sebacaeous carcinoma.

Well differentiated sebaceous carcinoma is a controversial entity. Many authors would now classify these as sebaceous epithelioma or adenoma.

In sebaceous carcinoma, the tumour is generally dermally based with invasion into subcutis (figure 1) and native structures. Pagetoid invasion of the overlying epidermis may be seen. The tumour cells are basaloid with foci of sebocytic differentiation. Sebocytes are large cells with a multivacuolated clear cytoplasm (figure 2). Necrosis is common (figure 3, 4). 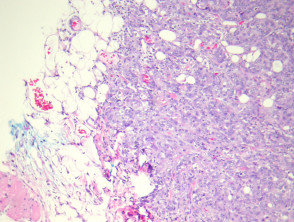 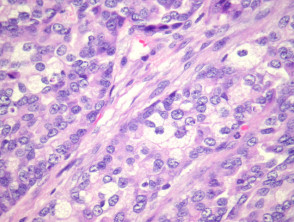 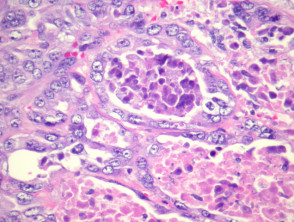 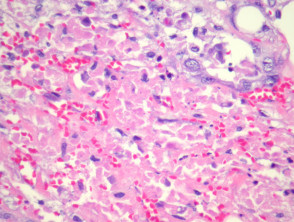 Various other special and immunostains have been trialed with varied results.

Basal cell carcinoma may contain some sebocytes but will exhibit at least some areas with classic BCC morphology. BCCs are generally negative with EMA.