Typical SCC has nests of squamous epithelial cells arising from the epidermis and extending into the dermis (figure 1). The malignant cells are often large with abundant eosinophilic cytoplasm and a large, often vesicular, nucleus. Variable keratinisation (keratin pearls etc) is present (figure 2). 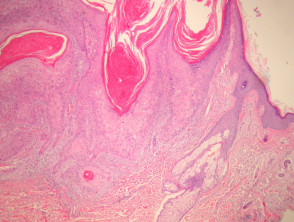 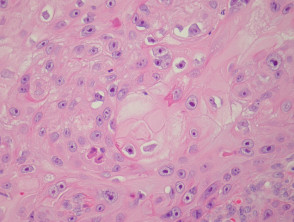 Typically SCC is graded as:

Grading of SCC depends on how easy it is to recognise the characteristics of squamous epithelium (eg. intracellular bridges, keratinisation), pleomorphism and mitotic activity. There is considerable inter-observer variation in grading SCC. 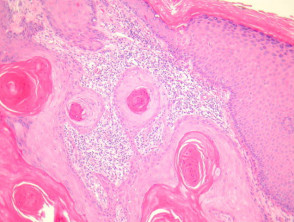 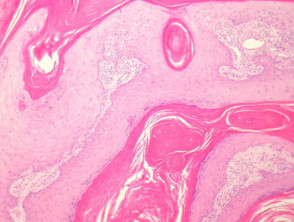 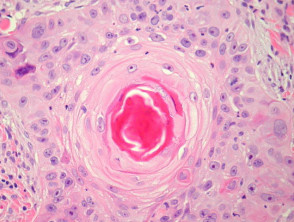 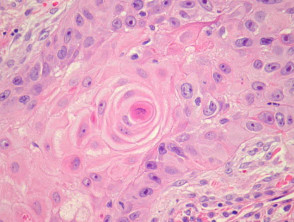 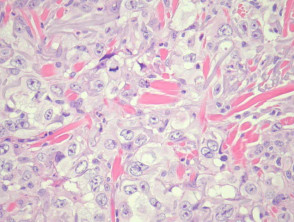 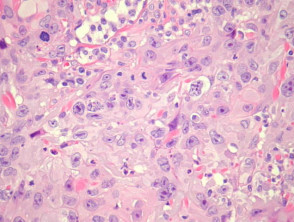 SCC can infiltrate along nerve sheaths, adventitia of blood vessels and lymphatics. Inflammation around these structures may be a clue to tumour in these areas. Tumour cells may evoke a stromal desmoplastic response. Extra-tumoural vascular invasion and neural invasion may be seen (figures 9, small – arrow indicates nerve; 10, large). 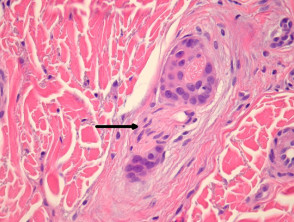 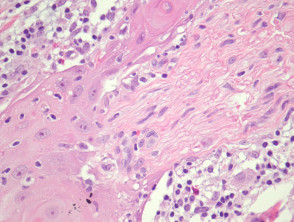 Immunoperoxidase staining may be helpful in poorly differentiated and spindle cell-type SCC. EMA, MNF116, cytokeratin5/6 and p63 are expressed in SCC.

SCC is usually not difficult to recognize pathologically. Deciding if the lesion is invasive or in situ can be more difficult, requiring levels through the specimen to be examined. Benign epithelial changes seen in the context of ulceration, stasis changes or infection can mimic SCC including:

The differential diagnosis of SCC variants can be extensive.