Toxic epidermal necrolysis (TEN) is a severe cutaneous drug reaction characterised by a prodromal 'flu-like illness followed by the rapid appearance of a painful erythematous rash and desquamation of skin and mucous membranes. TEN is at the severe end of a spectrum with Stevens-Johnson syndrome defined by >30% body surface area skin detachment.

In TEN, there are subepidermal bullae (Figures 1–3) with widespread epidermal necrosis and subsequent separation or loss of the entire epidermis. Apoptotic keratinocytes may be seen at the periphery (Figure 2, arrow). There is minimal inflammatory infiltrate. 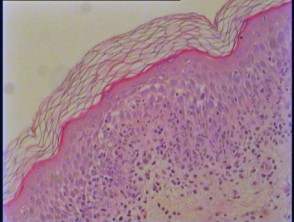 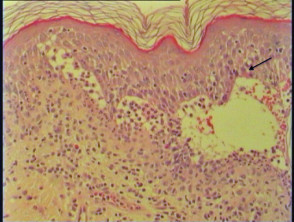 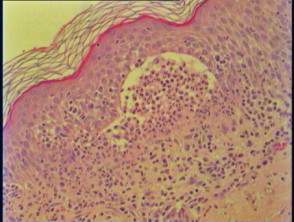 Erythema multiforme: Apoptotic keratinocytes with less prominent necrosis (may be seen at the centre of established lesions), inflammatory infiltrate is more prominent with lymphocytic perivascular infiltrate.